Come over to see what's happening, buy a copy of my new novel, This World So Fierce, and check out my quilt portfolio.

The new website is a work-in-progress, but I have lots of new blog content. You can go straight there by clicking here.

Email ThisBlogThis!Share to TwitterShare to FacebookShare to Pinterest
Labels: marymarcotte.com

Of grandsons and jeans and hurricanes

Our grandson Lane, came for a visit last Friday. You know what they say, "They only come when they want something"? Well, it's sort of true. He gave me a hug, after informing me that he needed some jeans hemmed. Sure. Not a problem. 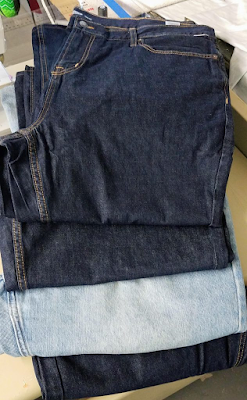 Let's see, clean and thread the machine, put in a new, extra-heavy duty universal needle (twice), replace the rotary cutter blade or at the very least sharpen it, spend 45 minutes cutting and sewing new jeans. He's a working man now, so he needs to dress a little better than he did for hanging around the house. Every change seems to affect me somehow. 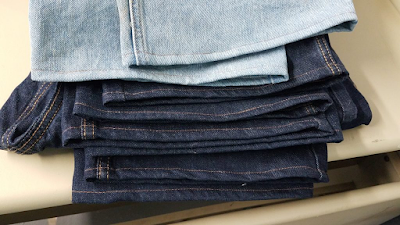 I'm kidding, of course. Having them over is a joy. Not that I spent much time with him or Adam or Rory. They were all outside helping Richard set up the greenhouse. A project started out for me, but Richard can't do anything in a normal fashion. We need, at most, a 10 X 10 space. The old greenhouse has an 18' width, so okay 10 X 18. Of course, my country boy is making it 18' X 20'. Almost four times larger than my original request. I'll let him figure out the heat/water and whatever else it may need. 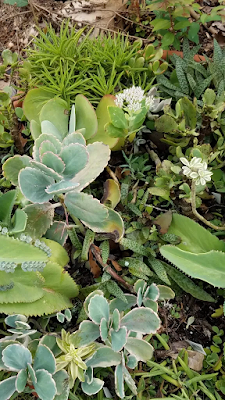 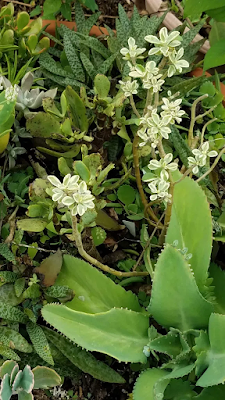 Why a greenhouse? Mornings are dipping to 45 degrees. Afternoons can be a warm as 80 degrees. I learned last year that succulents and other pretty plants can't take extreme changes in temperature. And those babies were expensive. All I had to do was put the idea of a hothouse in hubby's head. Don't you know he ran with it. I love that man! 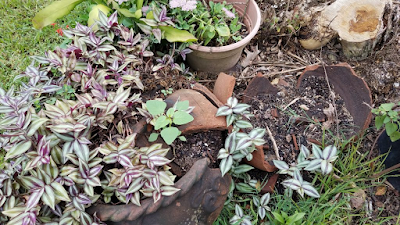 In other news, we had a little, tiny catastrophe here. A tree fell during one of the hurricanes. (There have been so many, but I think it was Delta.) That it fell was not a problem. No, the real problem was that it fell on top of several of my favorite pots! The plants survived. The pots did not. So I have no choice but to replant them in a container of some fashion. Then off they will go to the new/old greenhouse. New because it was just put up. Old because the metal ribs are about the only thing left from when we owned the nursery. The country boy saved the metal ribs, so here we are with a fancy greenhouse, lots of plants, and no pots.