Posted by Mary Marcotte No comments:

There are 10 girls in my family, including myself.  Which means that when I set out to make something for someone, I have to be willing to make at least eight more.  Since I don't like to be left out, I usually make a couple more than that. 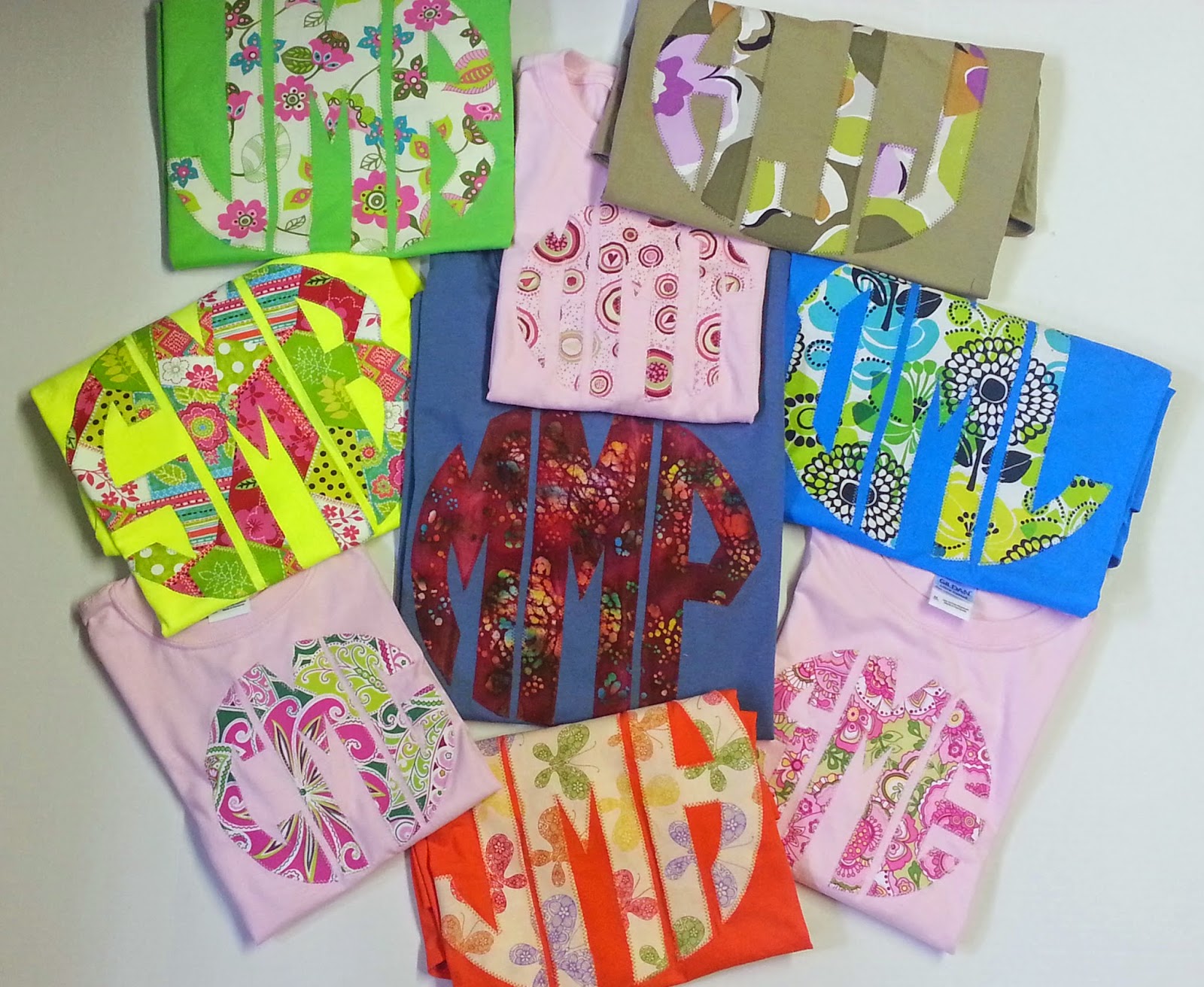 I recently made a tee shirt for myself thanks to the help of a good friend.  She's the artist who designed the letters for the shirt. I told you about her in a post a few weeks ago.  Her FB page is here.  She thought it would be fun if I made shirts for everybody.

I am easily convince and set out to make one for each of the girls on my list.  That means the three daughters-in-law, the three big granddaughters, and the three little granddaughters.  No one to be left out, of course.


The problem with making shirts for everyone is that there are so many to sew.  I don't necessarily lose interest so much as I like to make a couple, see that I can do it and then move on to something new.  I like challenge but I'm more of a sprinter rather than a long-distance runner.  (Oddly, I make quilts!) 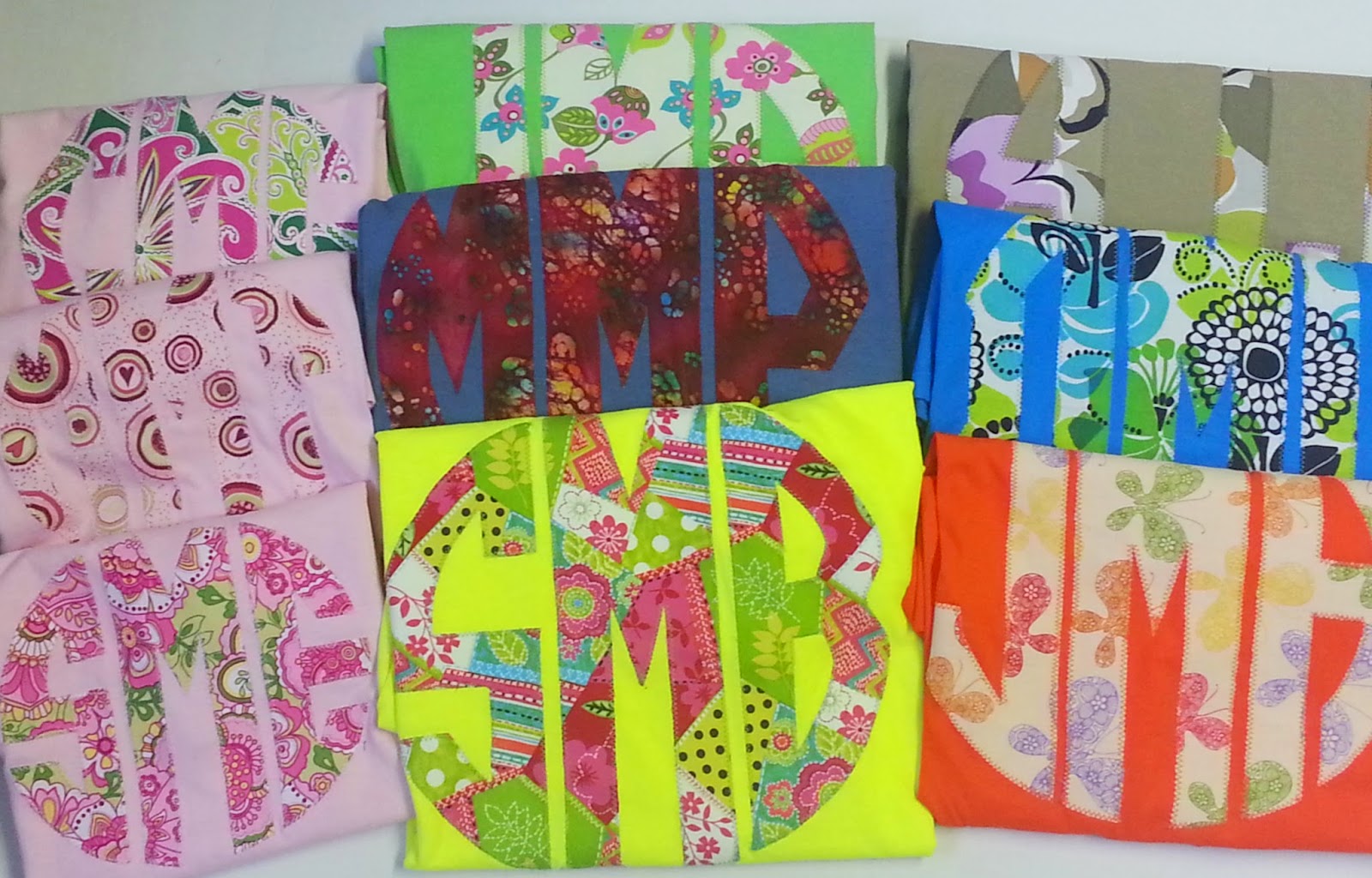 Anyhoo, I bought enough shirts to make one for each of the girls and a couple for myself.  Then I promised to finish all the gift shirts before starting on my own.  I really wanted a couple of my own, so I had some incentive.


And having incentive was nice, but it turns out that I didn't really need it.  I got very enthused about seeing how each shirt would look once completed.  I'd chosen the fabrics based on each person's interests, then chose the shirt to match the fabric.  Once the shirt was complete I could determine whether or not I'd chosen well.

I think I did and here's why: the day after Christmas three of the girls wore their tees to go shopping.  Then on Sunday a whole crew of Marcottes returned from a visit to St. Jude's Children's Hospital and Dusti was wearing her shirt. 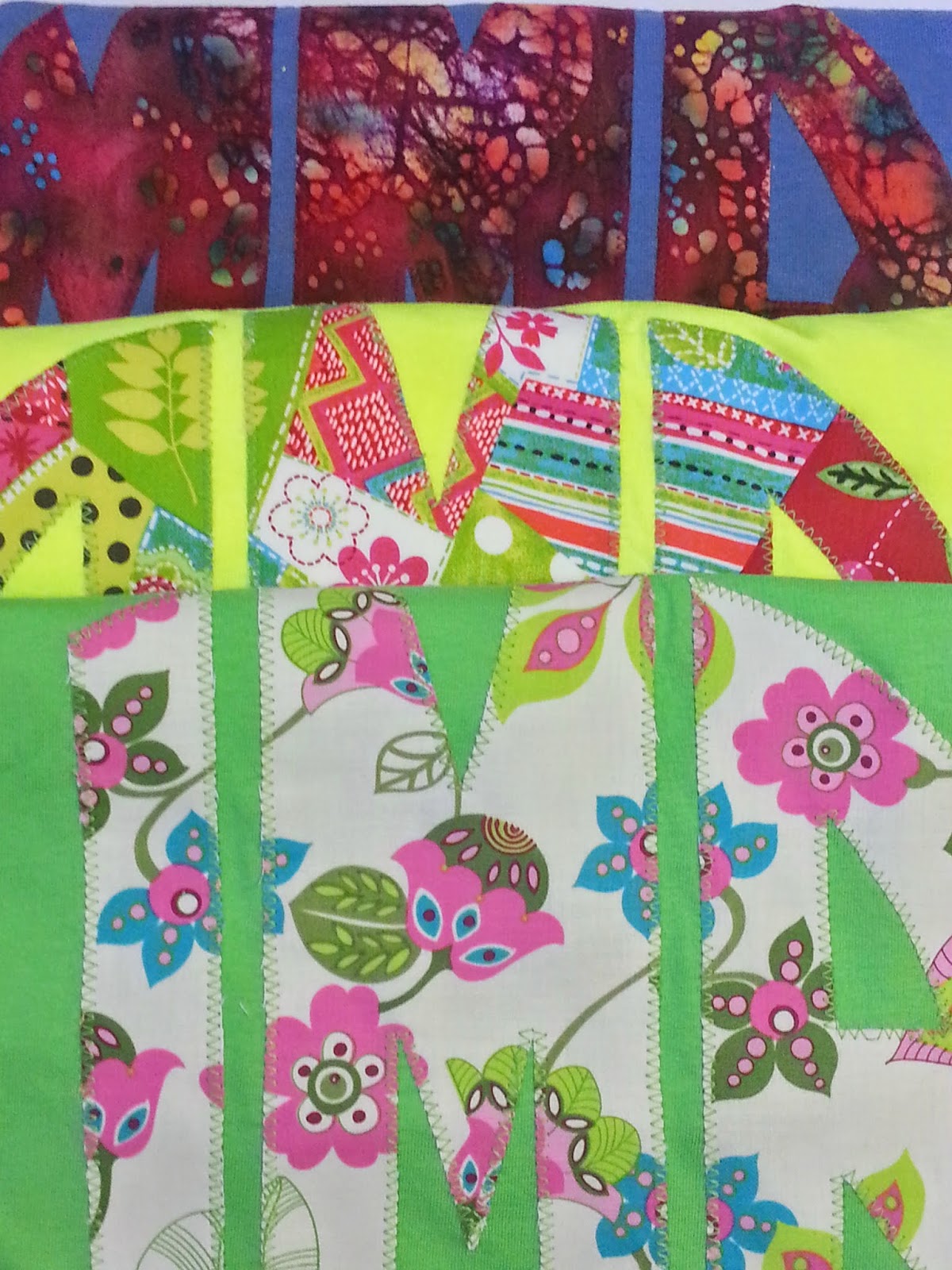 Of course, everyone said, "Thank you."  They are sweethearts and very polite, but I got a good feeling that they also liked my little handmade offerings and that, my friends, is much better than working on my own shirts!  Leta did it again...go look her up!
Posted by Mary Marcotte 1 comment:

Bright lights, bright gift wrap, bright faces...everything seems to be bright and cheerful and happy at this time of year.  That said, let's take a look at few bright, happy things and let them inspire a couple of bright, happy quilts.

Now that Christmas is almost over, or at least the gift-giving part is over, I can share a couple of projects that I've been working on. They were Christmas gifts, you understand, and while most of my girls do not read my blog, some of them do (or say they do), and I didn't want to give any surprises away. 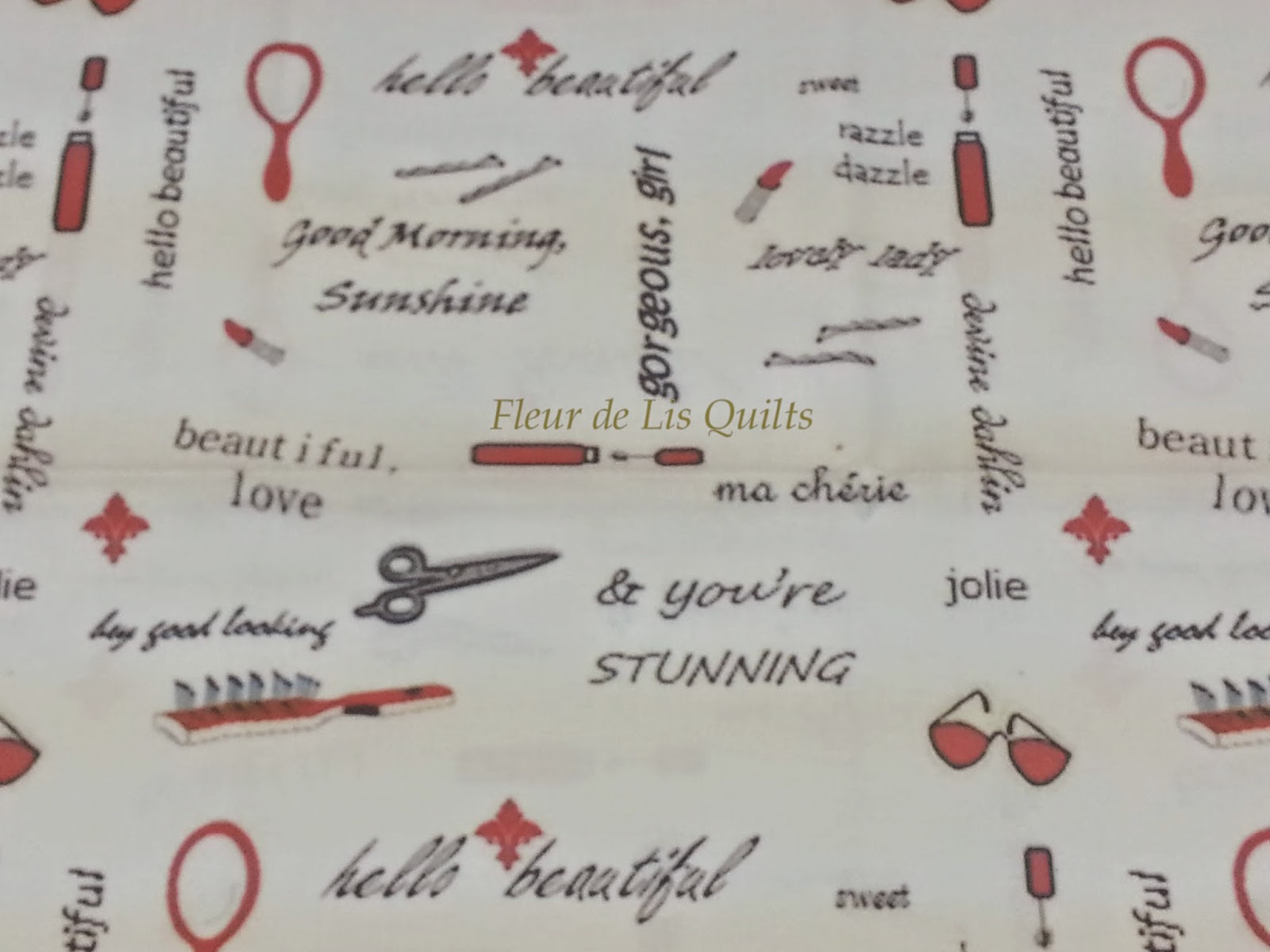 One project was a long-range commitment for me.  I designed and ordered some fabric through Spoonflower.  I was able to purchase only one yard...perfect for my "needs." 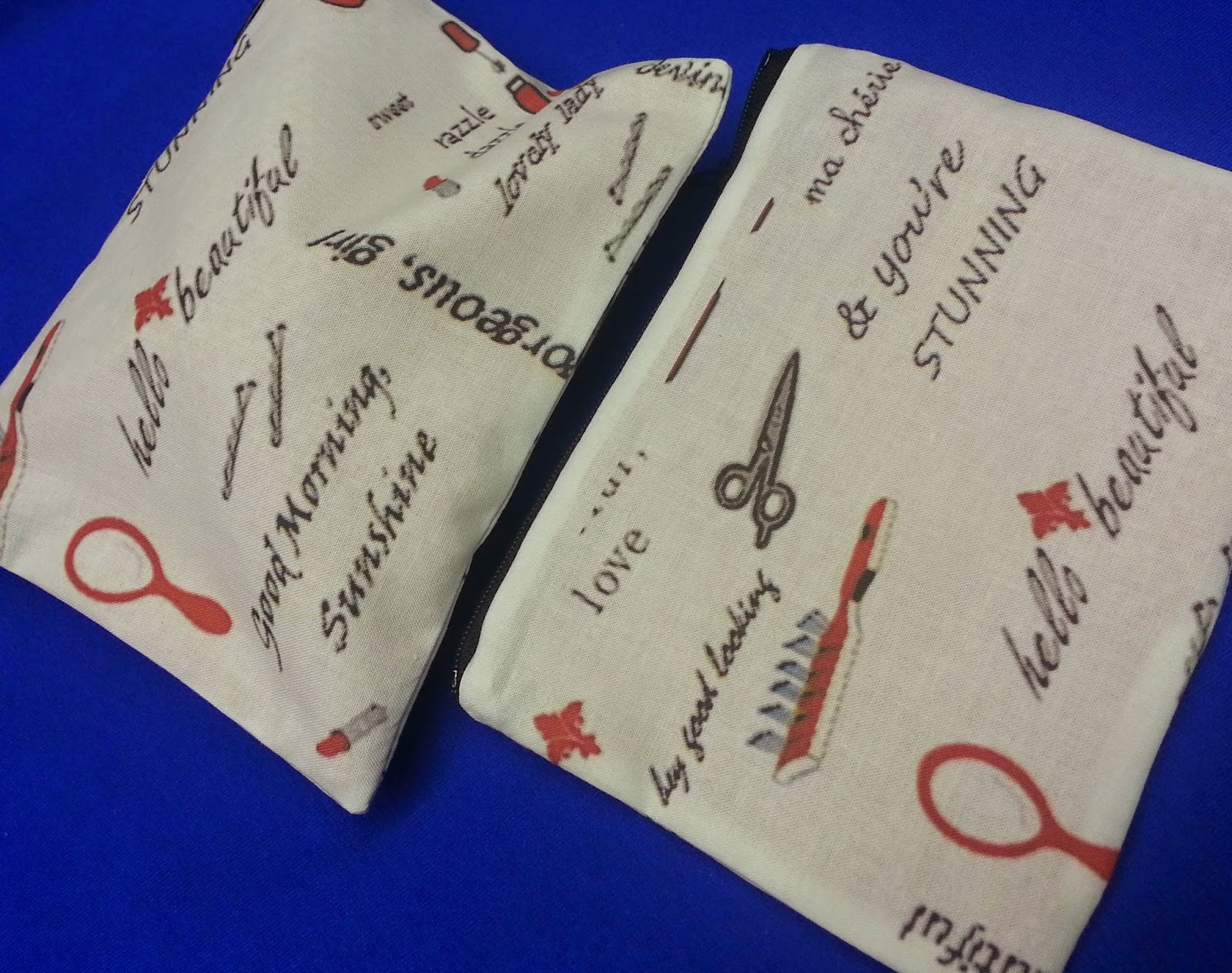 Then I turned the fabric into some pretty little makeup bags for the beautiful girls in my life. 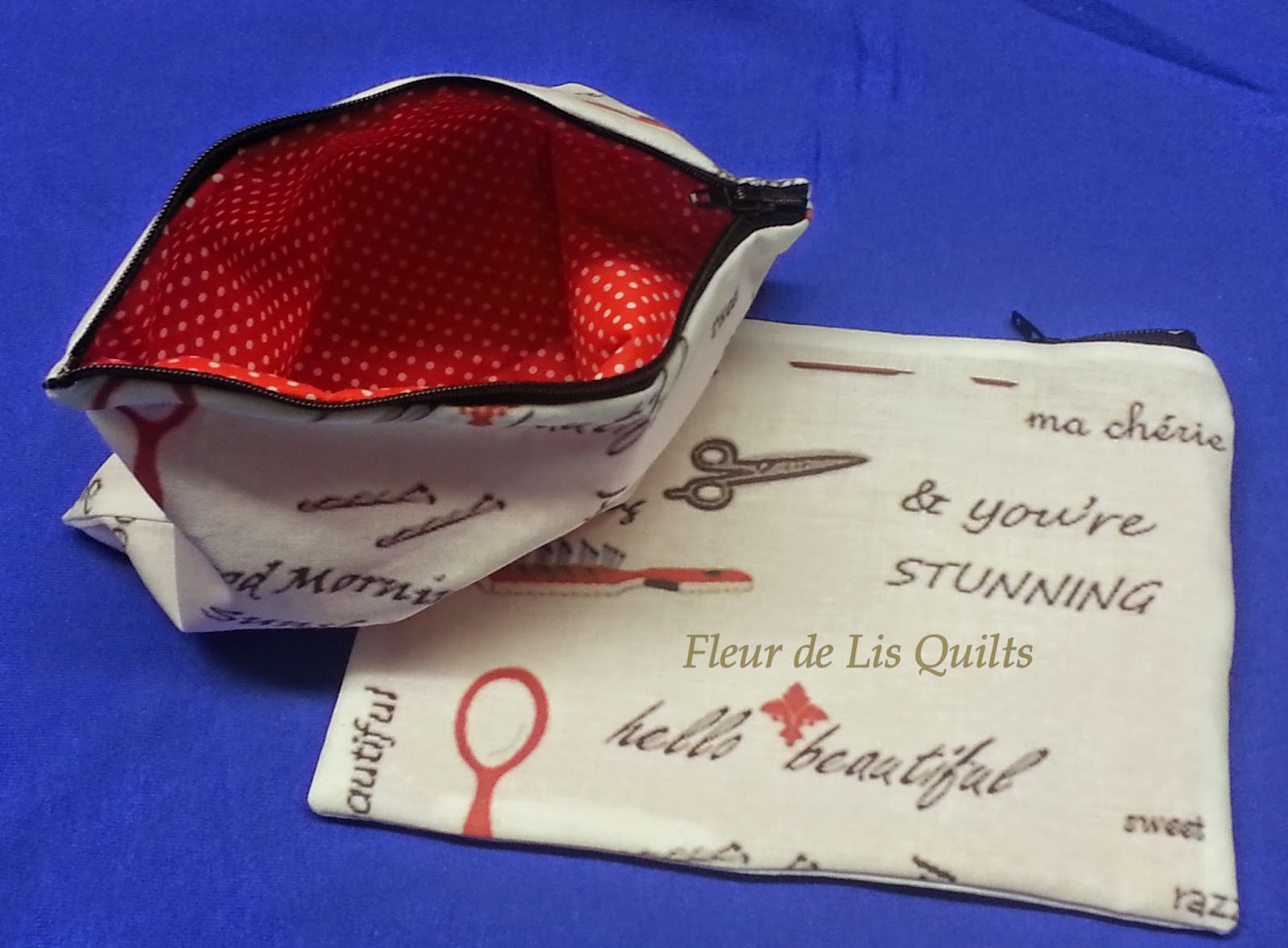 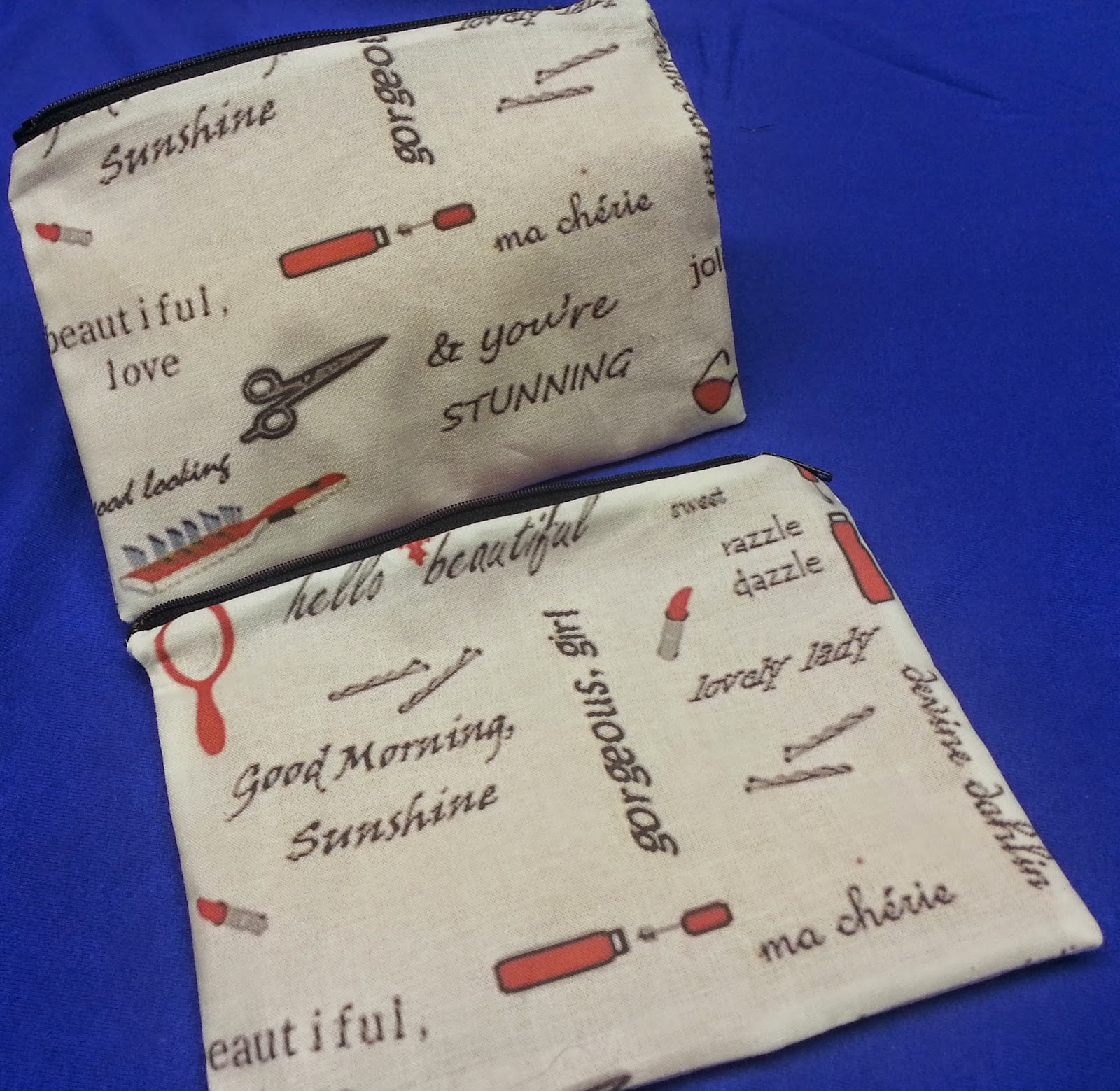 One for each of the daughters-in-law that is a nice square, traditional size.  They're about 7 X 8, so they'll hold a nice bit of makeup without being too bulky for a purse or bag. 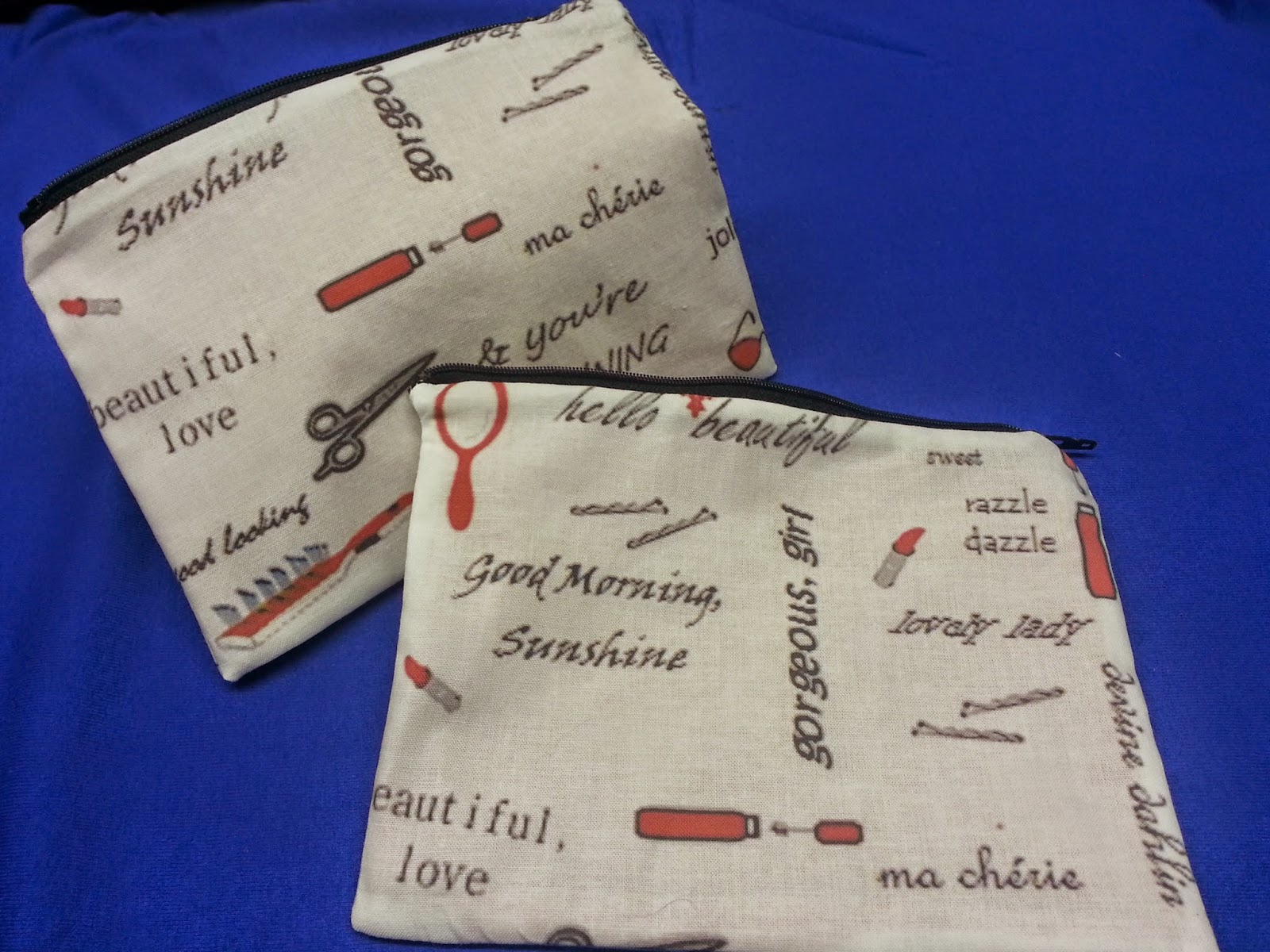 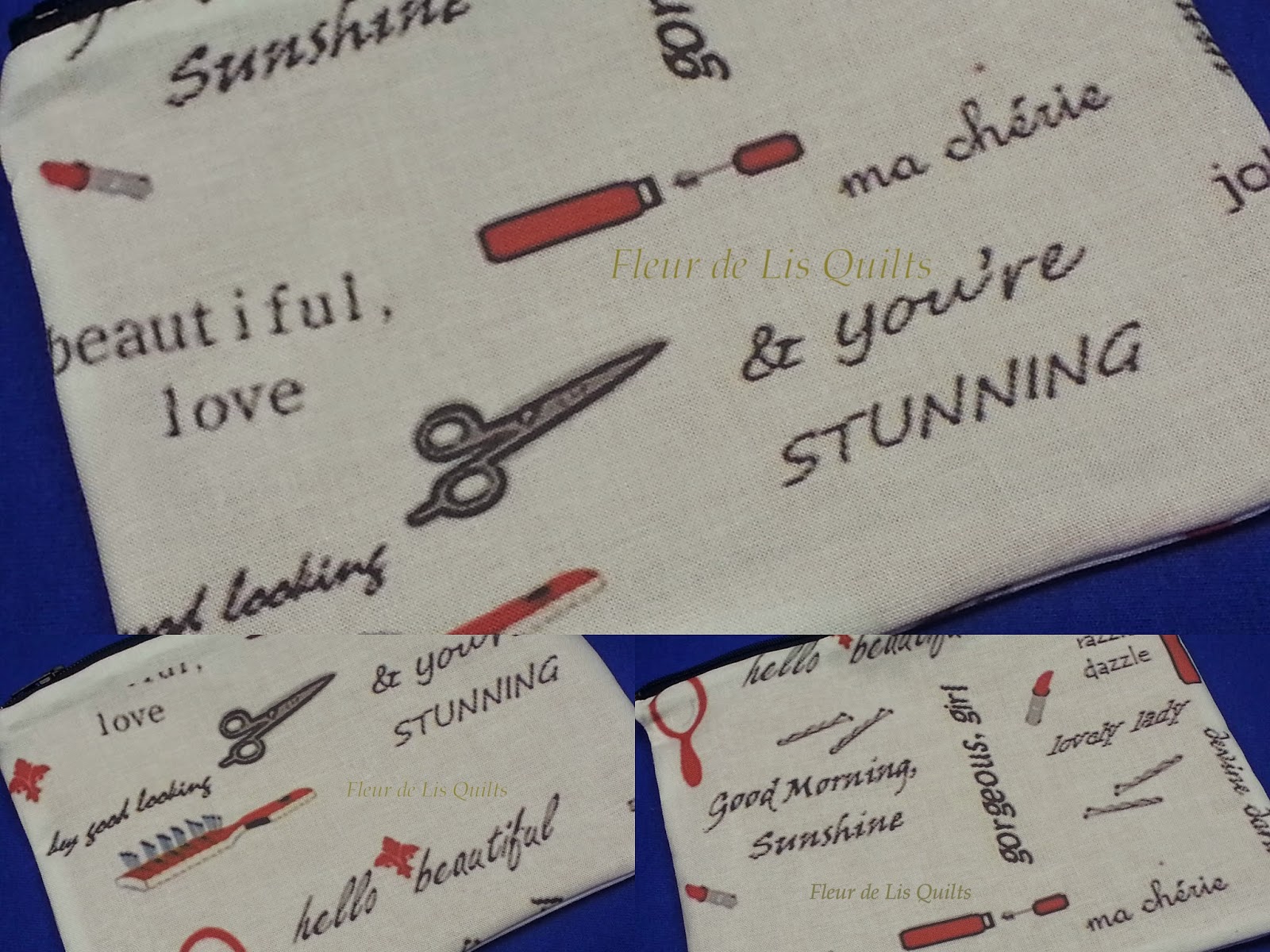 Then I made three more in a different shape and size.  Thinking that the middle girls (granddaughters between 11 and 16 years old) would like to use them differently.  So these are shaped to hold makeup, brushes, or just pens, markers or highlighters.  The zippers are 9 inches but the width is only about four inches.

I love that the twist keeps the bag open and gives it a funky, fun look.  Originally, I'd made one for Dusti and Alayna, but Jolie got some makeup from Santa, so I added her to my list and quickly made hers today. 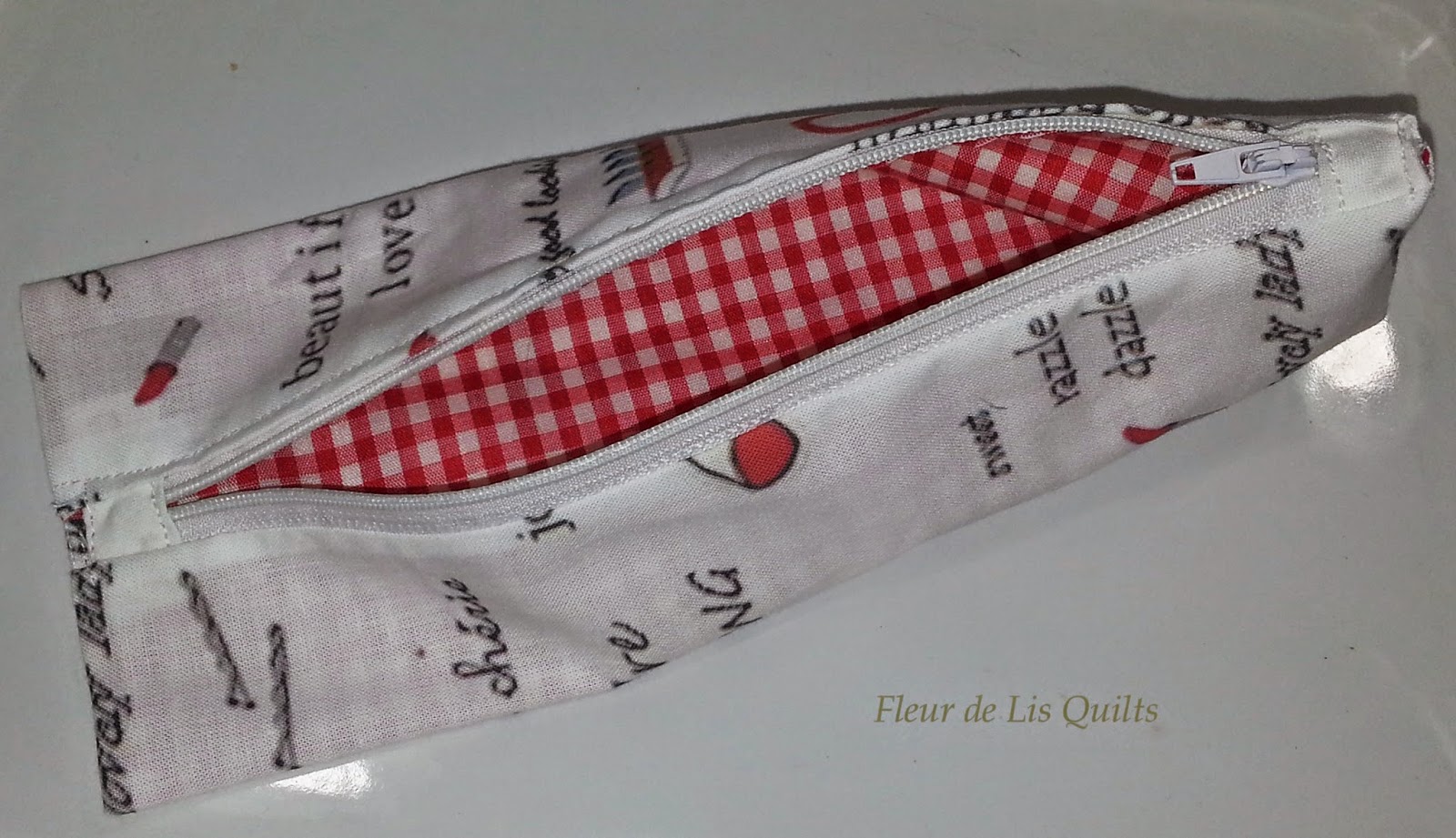 In the end, this was a fun project.  The fabric costs much more per yard ($17) but designing it was fun.  I really wanted fabric that would tell them how beautiful they are.  How better than to design fabric that literally says, "You are beautiful" in several ways? 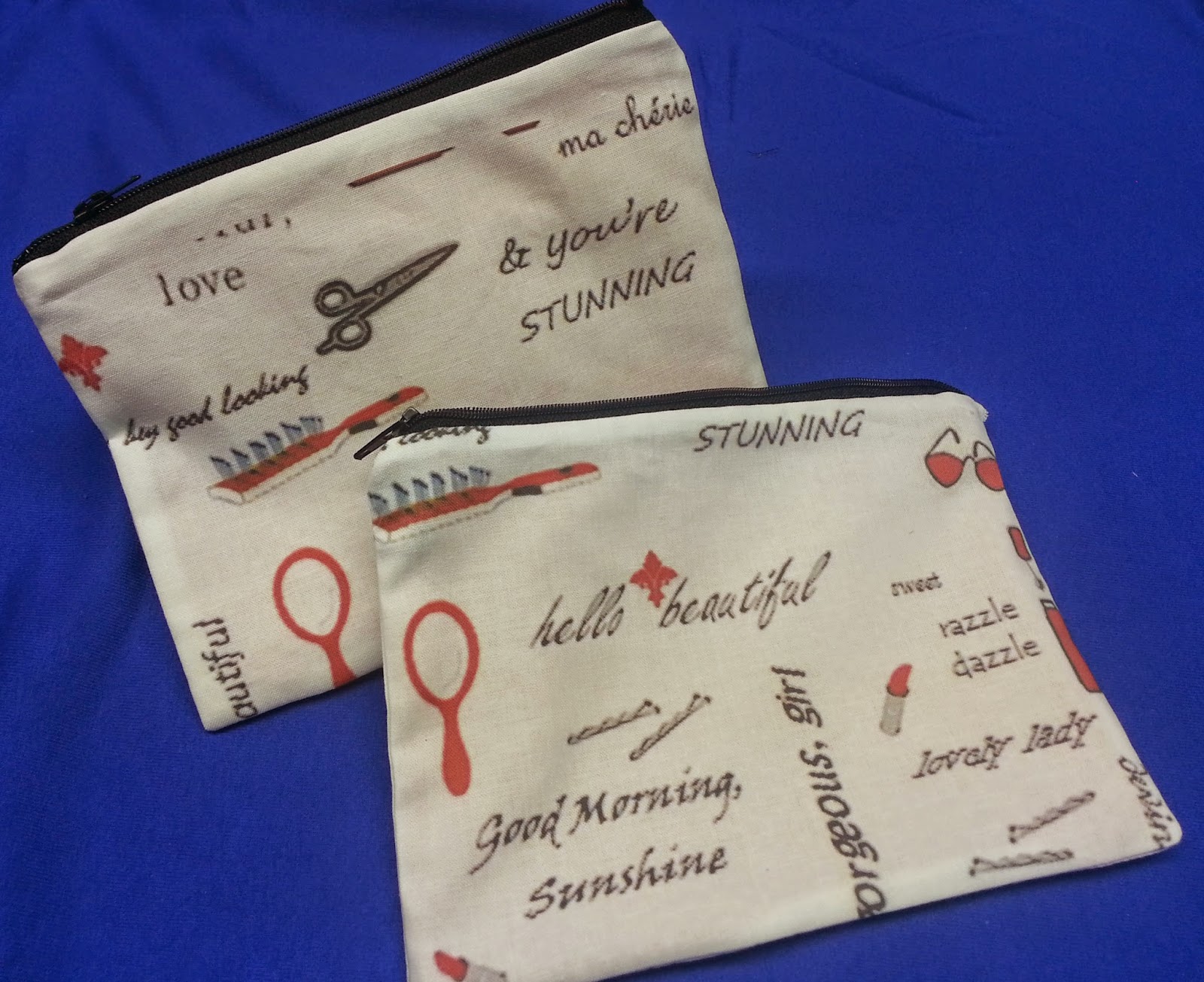 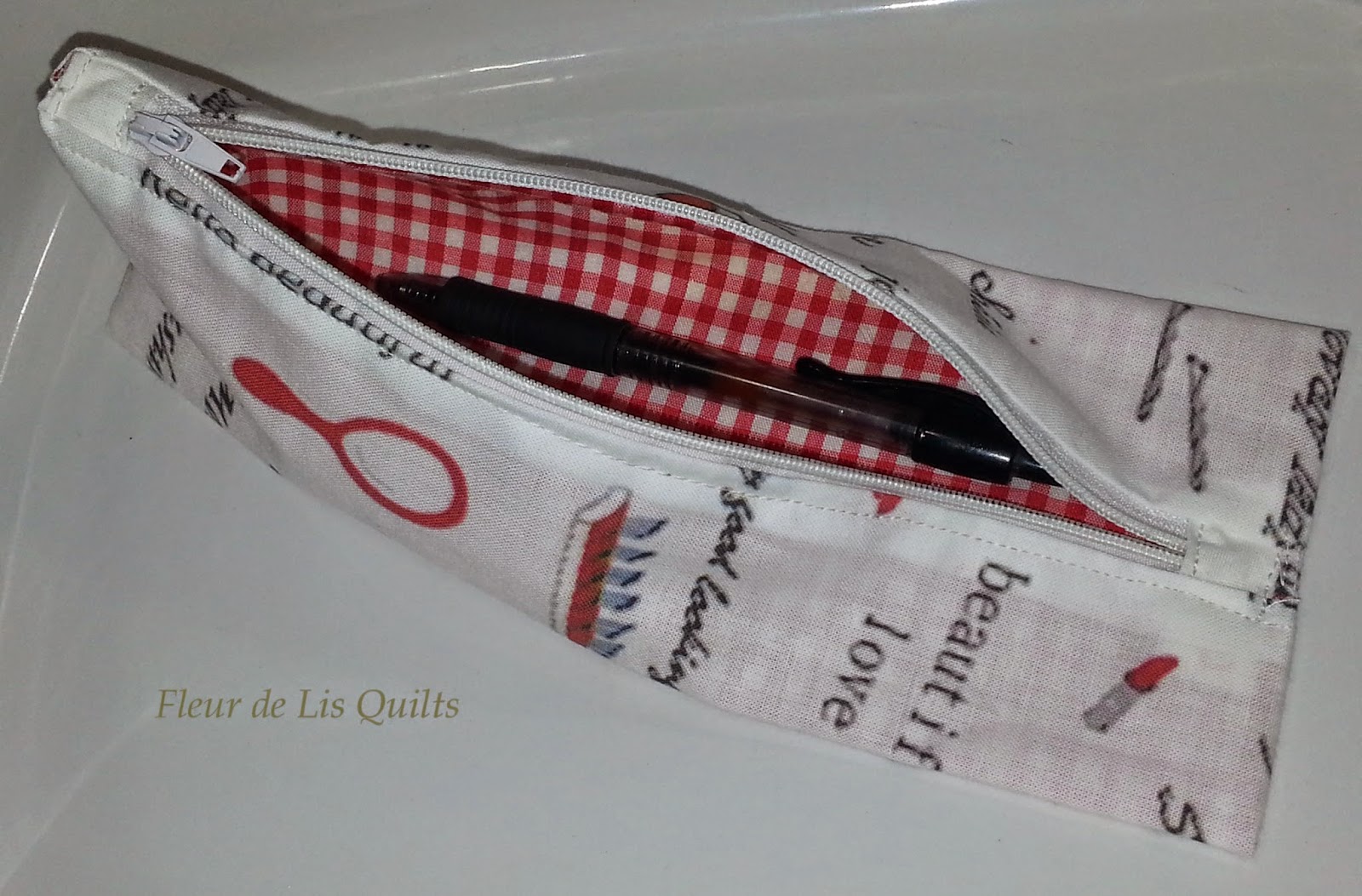 "And entering into the house, they found the Child with Mary, His Mother, and falling down they adored Him" (Matthew 2:11).

Of course, the song is a folk song that really has little to do with the Bible story,  Unless one believes the theory that when Christians were persecuted, the song was written with each idea representing something in the Bible, for example the partridge represents Christ, the two turtle doves represent the Old and New Testaments, and so on.

I've always loved the song and decided to find a few printables to share with you.  What you'll do with them, well, I don't know.  I think I'll just walk around singing for a few days, attend mass as much as possible, and appreciate that we can celebrate the Christmas season just a little longer.