In Louisiana there are traditions that we treasure. There may be times when we can't follow the tradition for a while, but we follow in spirit and love and wishes to be part of the fun.

One of our traditions is attending the Natchitoches Festival of Lights.  The lights are the main attraction, but there's so much more to the fun.  There's a month-long festival that seems to wake up at Thanksgiving and lasting until January. 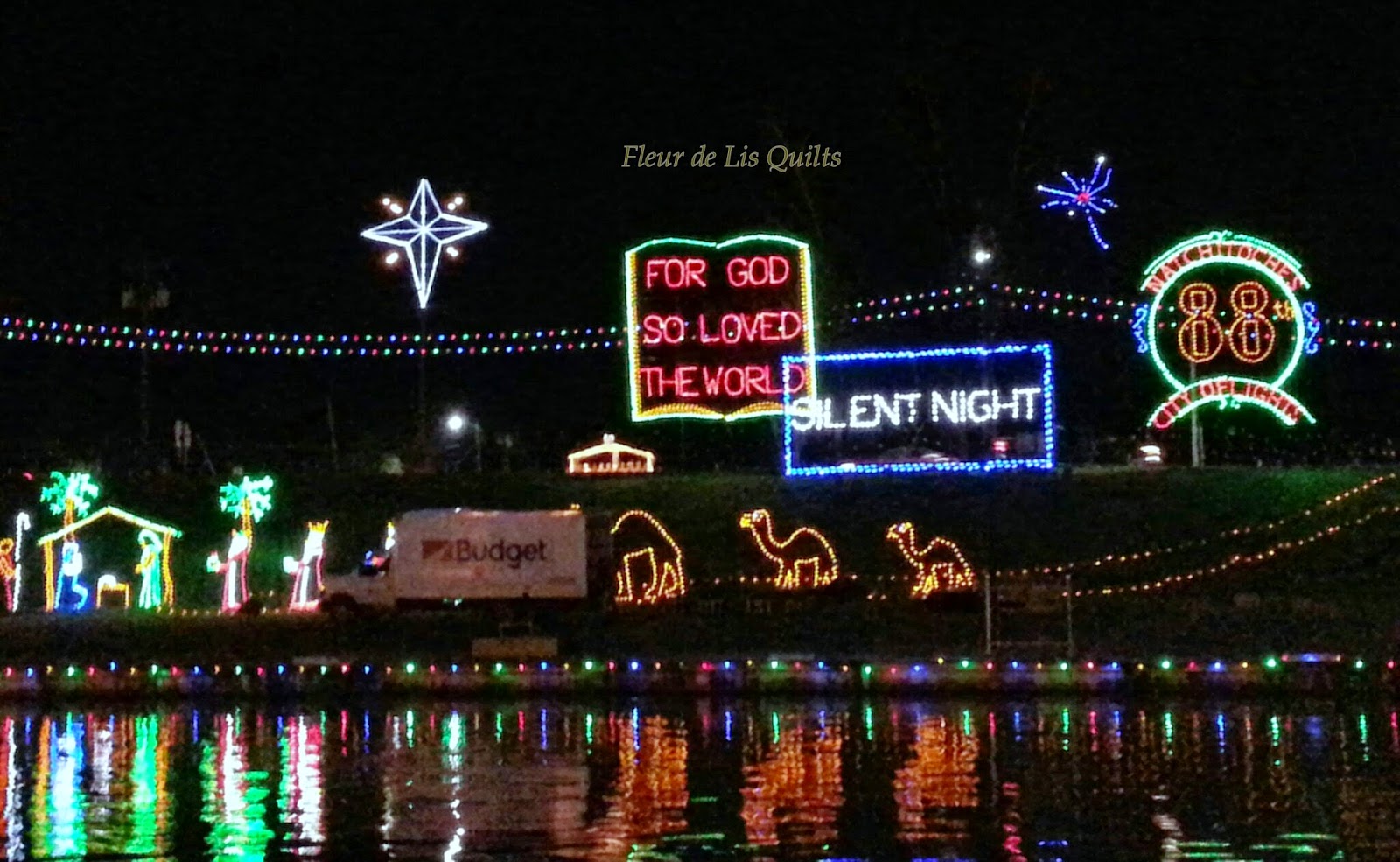 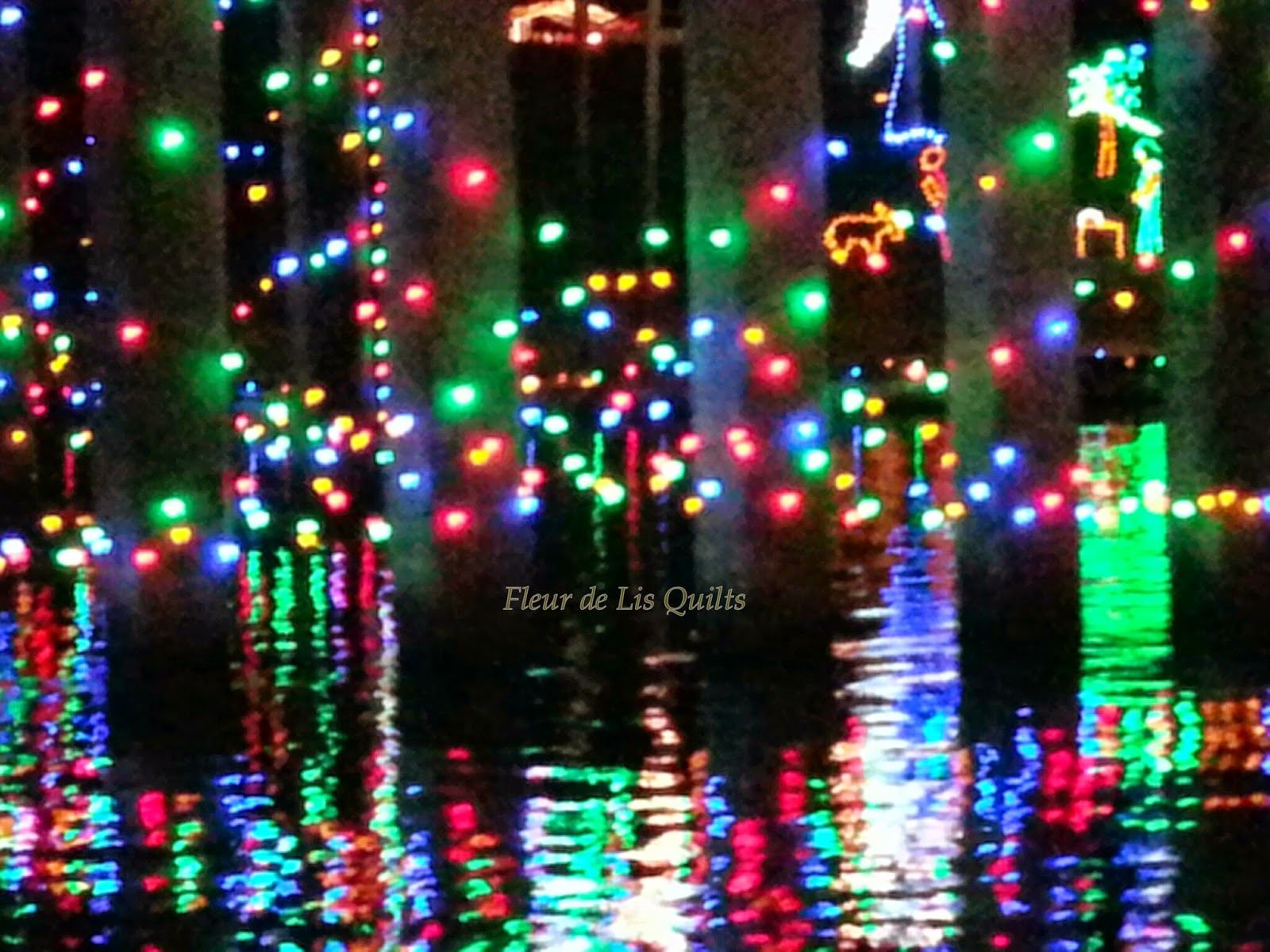 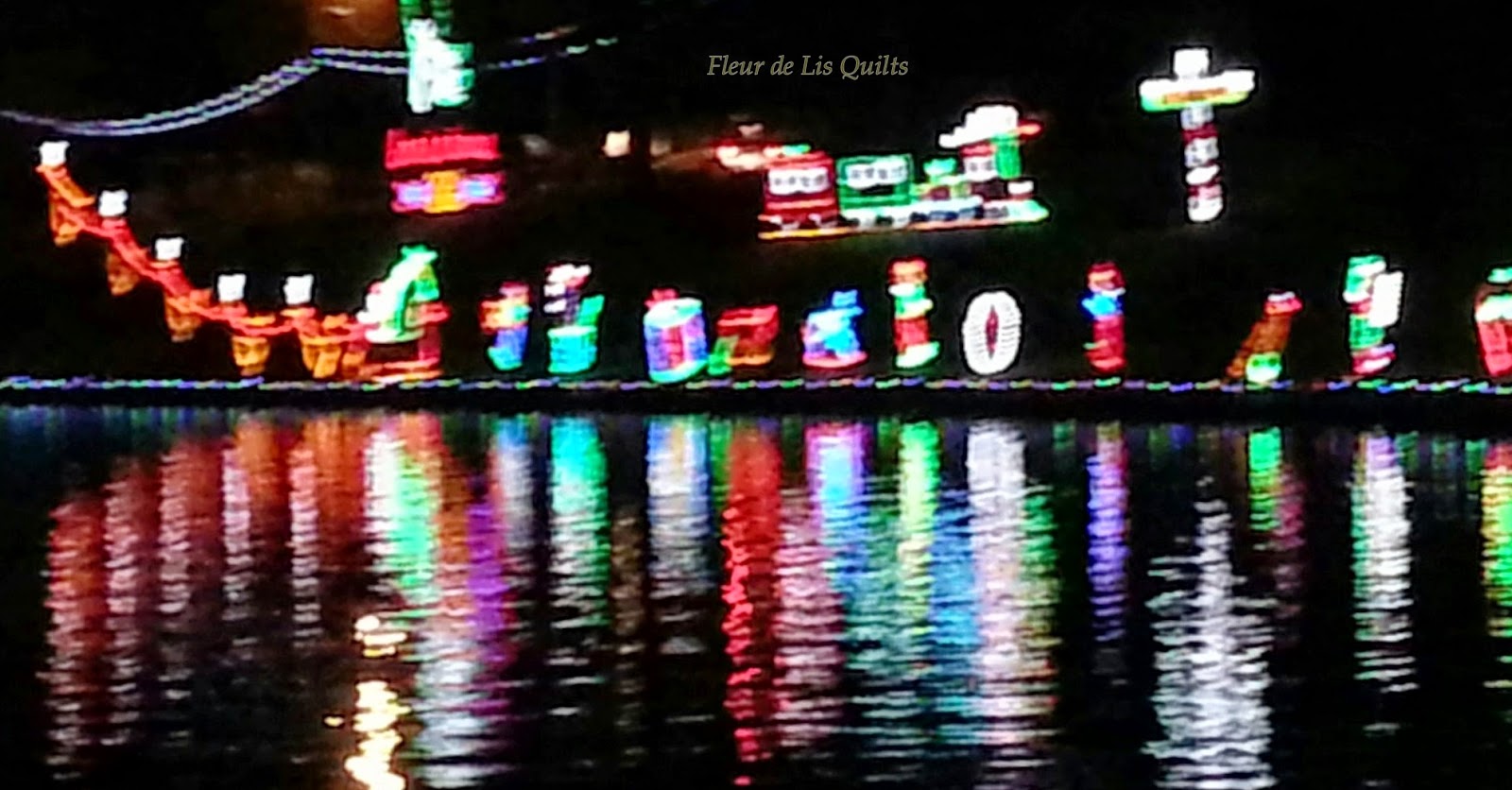 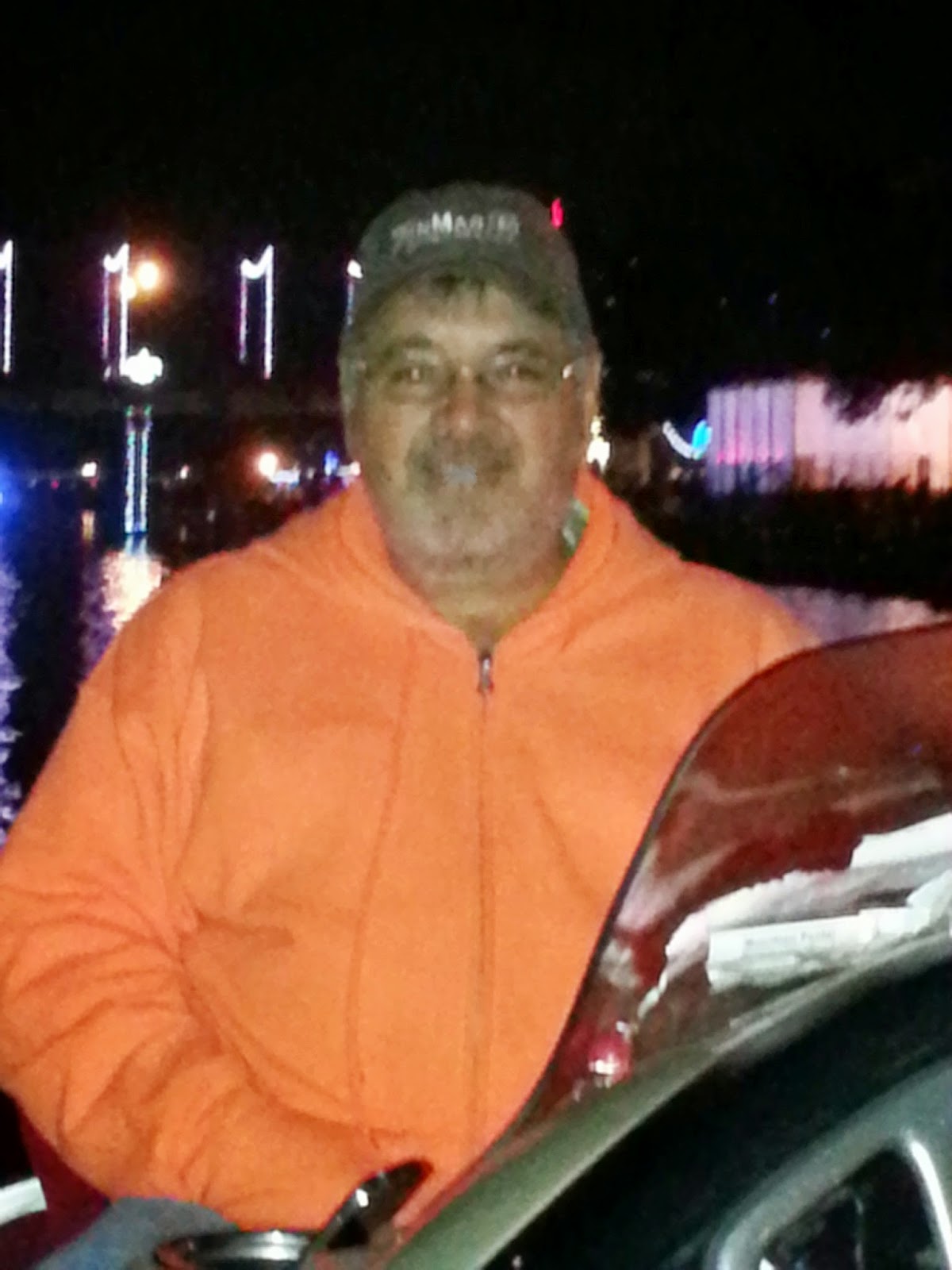 By festival I mean all the food and all the fun: fireworks, parades, laser lights, a huge craft fair and probably some things that I don't even know about.  Well, I do know about one: a flotilla on Cane River Lake during the fireworks shows. (Yes, plural, as in every weekend in December.)  Last Saturday night I was on one of the boats with this sweet man.


I don't have a photo of the boat but with all of our son's family, a couple of stray friends, and Richard and me, it's safe to say that there were a few of us.  First, we took a ride down the river to enjoy the lights along the lake. Some of the houses are beautifully decorated both front and back, so whether one drives past on the road or on the lake, there are lights to view.

Then we rode slowly along Front Street, the area of town designated for the festival.  Both sides of the lake are decorated but the Front Street side holds the festival and the opposite side has the majority of lights and the fireworks area.  In the photo above you can see the squarish lights over the Church Street bridge which is closed to traffic during the fireworks.  This place is run like a tightly managed ship but, celebrating its 300th anniversary, the city knows how to throw a party.

Now there is one problem being on the water....it's cold!  I brought extra blankets, Stacey brought every quilt I've ever made for the kids, and everyone had coats, gloves and hats.  The kids piled one on another like chickens in a coop, and still we were cold. We weren't miserable and certainly we weren't in any danger of freezing, but the hot cocoa was a welcome cup of cheer. 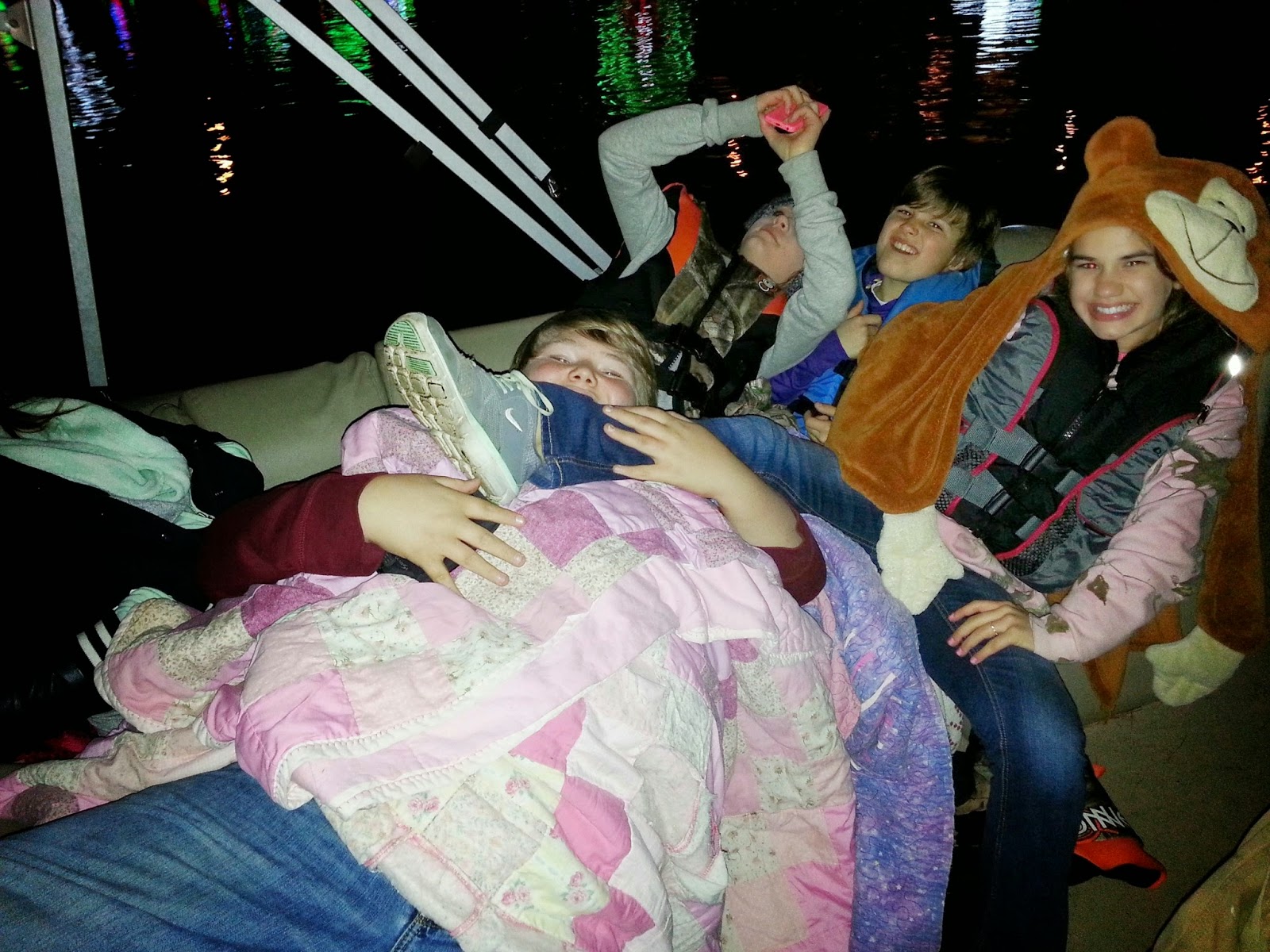 We docked for a short while after the fireworks to get a snack and say hello to family on shore, then off we breezed to a warm car for the ride home.  We're grateful for an annual trip to Natchitoches during the Christmas season: this one marked our second one and served as a wonderful family memory complete with all the fun that three generations can handle.

Wishing you and yours a blessed, happy Christmas.
Posted by Mary at Fleur de Lis Quilts

HI Mary, thanks for dropping north for a virtual visit with me. Your outing sounds like lots of fun. I can't imagine being out on the water at this time of year, far too cold. we didn't have any snow this Christmas, though perhaps it's being saved for January.

Love the idea of viewing the lights from a boat.