And so, once I found several flower appliques that I liked, I began adding them to the border that I had prepped the day before by sewing down a couple of stems.  I like the look of an asymmetrical border that has a sense of balance.  To achieve this balanced asymmetry, I first sew in somewhat balanced flower stems.  For this quilt I started by finding the center of the bottom border and the center of the longest stem--I had decided to use three, one long one on the bottom and one on each side.  I loosely placed the long stem curving up and down along the middle of the border and then curving around the corner and up the sides.  I then added the two shorter stems intertwining them with the first one.

I began adding the flowers on the bottom border and worked my way around the bottom and up the sides.  To insure that I had flowers on both sides of the center, I separated flowers into two groups.  I also tried to include flowers of different sizes near each other so that they would look more realistic.  The result is a vine that is not the exact same on each side but is clearly connected.  I prefer the look of flowers in nature rather than in formal flower beds--although those are beautiful.  The large single flower in the center that falls more on the blocks rather than on the border is a reminded me of a corn plant and although it intrudes somewhat, I like that it breaks up the monotony of the blocks and in one or two instances allowed flowers to "fall" out of the border and onto the blocks. As you can see from the photos, the quilt is loaded onto the long arm machine and ready for quilting. 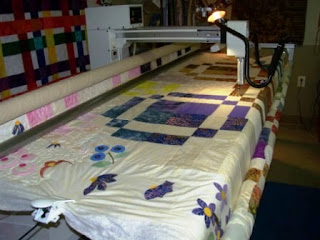 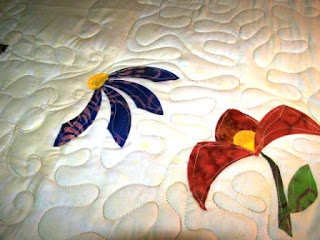 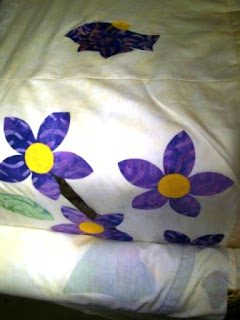 Once the flowers were all placed and ironed downed, I was ready to begin quilting.  I loaded the quilt onto the long-arm and played with several ideas for quilting.
Posted by Mary at Fleur de Lis Quilts