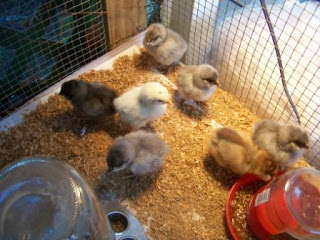 I have no idea why, but I decided some time ago that I wanted a few chickens.  We live on a farm, right?  What kind of family farm doesn't have a few chickens?  Right, so there I was picking up a bunch of kids at the LSU Ag Center and 4-H Museum just a few miles down the road from our school and a lady there was selling baby chicks that were just so cute and fuzzy.
Okay, I managed to resist the temptation, besides I didn't have any cash on me AND I didn't really have a place for outside babies.  Afterall, we do have cats.  Lots of outside cats who eat anything on legs--mice, bugs, lizards, small snakes, birds--they have a varied palate.  How long could a couple of baby chicks last?  So I put the cute fuzzy away, gathered up the kids, and loaded the bus.  About halfway back to school one of the kids tells me he got my favorite chick for me!  I almost ran the whole bus off the road.  One chick?  I was now saddled with one chick?  And he was so sweet about it.  I couldn't hurt his feelings. 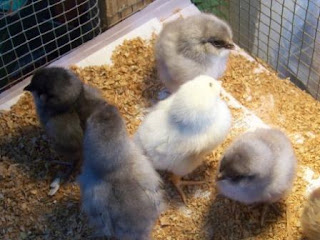 So one chick was coming home.  But then the 4-H sponsor noted that one chick probably wouldn't survive alone and so maybe he should just keep the chick.  Yeah, sure, that worked for two seconds, then our sweet boy decided that he'd give up one of his chicks so my chick would have company.  The one chick dilemma solved.  Well, what the heck!  Chickens were wanted and now we'd have some.  Of course, two chickens weren't what I was thinking, but our sweet boy solved that as well.
The "ag boys" returned the next day and although I wasn't at school, I got another five chicks.  So, now we have seven.  But wait, there's more!  A couple of teachers also got baby chicks--it is Easter, after all.  Once they found out that I have some chicks and a now a place to house them, they asked if I'd adopt their chicks after Easter, you know, when their kids get tired of caring for the chicks. 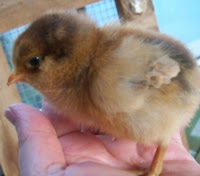 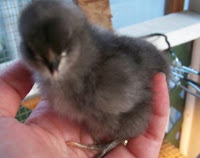 So, there are now seven and possibly more on the way.  Of course, if you have a family farm with a few chickens, it makes sense to have a few ducks and rabbits, too.  Why not?  We have a too big garden, a large pasture with horses no one rides, an occasional cow or two, and lots of room for small fuzzy darlings. 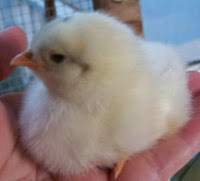 What we don't have is a protected space for them.  The chicks are quite happy in their borrowed hutch, but that's because they are quite small.  In a few weeks they'll be much too big for the little cage they're in now.  That gives Richard only a couple of weeks to build a bigger birdcage!  We've decided on a large (cat-proof) pen with a hen house near the shed.  I'd like about 15 or so chickens, enough to give us eggs but not so many that they overwhelm us.  Of course, that's my plan.  Richard does everything just a little overwhelming, so we'll see how the plan goes.  In the meantime, I'll keep you posted on both the plan and the fuzzy peepers.
Posted by Mary at Fleur de Lis Quilts