Some time after Daddy died in January, a wonderful friend sent this book to me in the hopes that it would encourage me through my grief.  At the time I was in the middle of a novel, so I set it aside intending to pick it up next.  I've said many times that I'm a wolf-reader, devouring books once I get started.  This book, however, is not a wolf read.  There are short stories of three to five pages, divided into themes that mostly deal with needle work.  Perfect for a grieving quilter, right? 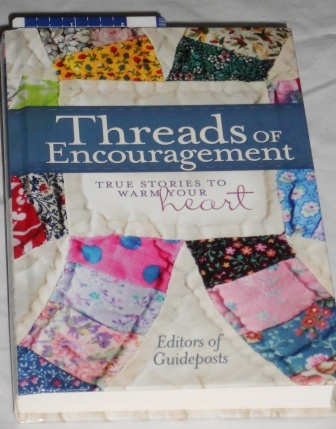 One gloomy day I picked it up and read a story or two.  A few days later, I picked it up again.  Then again.  The heartwarming, quick reads are immediately followed by a line of scripture or a quote.   The writers honestly share moments when faith was tested, when times were especially difficult, or when the world was not right.  Since I've experienced the sense of loss, especially during mom's long illness and right after dad died, it helped to read how others have coped.  Certainly, it's been helpful just to know that others have traveled the hard road and kept going.  And it's humbling to read how much more difficult the road is for others. 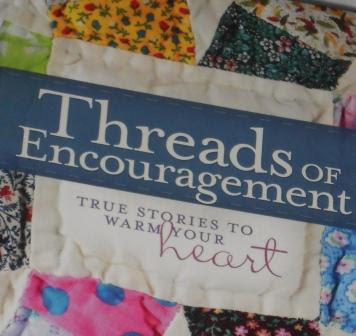 Of course, there are times when I've picked it up and wolfed-down several stories, but that hasn't happened as much as I expected.  Guess it helps to fight the urge to gobble it down quickly and to keep telling myself that I don't have to finish it right away. 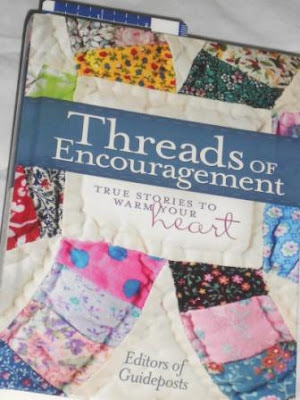 I even put it aside for a while to read another novel, and I found picking it back up not difficult at all.  I've finished with the book, but I think I'll give it one more go.  I've decided to read it sort of backwards.....I'll look up the scripture in my Bible first, and then read the story.  This may help me to use it more for meditation, rather than as a quick read, like a magazine article.   Honestly, doesn't my friend know me really well?  I would not have picked this book up for myself, but I have certainly gotten so much more from it than I could have hoped.

One more thing that it's encouraged me to do: pick up those NICU gowns again.  (more on that in a day or so)  A common theme, I've discovered, is that when we're hurting, it's especially helpful to do for others, and I so love making those tiny little gowns!

Reminder: if you haven't signed up for my Red, White and Blue fabric giveaway, you might want to do so......go here for the details!

Stories like that give hope and are great to encourage. Happy reading and stitching : )