Make a word! ~~ a little finish

Earlier in the week I got a wild hair that I would make something I've been considering for a while now: sewing words.  Wait, not sewing the words--words about sewing.  Cut, thread, sew, quilt, baste. Those are the words. So you get it, right? 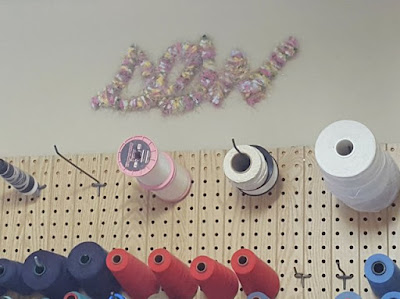 Have I mentioned that I love words? That I'm an English teacher. I write. I read. Those are definitely all me. Well, some things about me, anyway. So you could say I have a thing for words. Words on fabrics? Happy dance once around the kitchen!


I had this pack of yarn, which I can't use. It's ridiculous, I know, but it was just sitting waiting for me to do...something. So I did about the only thing I could: I made a word. 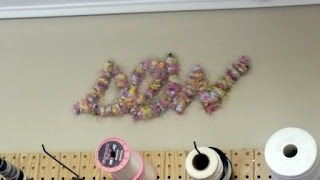 Really, made is the word for what I did. I started with a piece of insulation foam, the kind used to insulate the walls of a house. I drew the letters on the foam, then cut them out using a hot knife. (An electric knife works, too.) 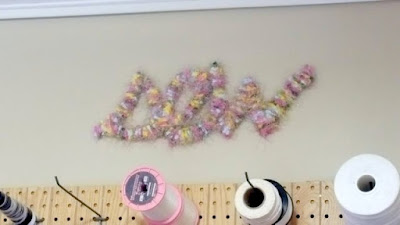 Then I covered the foam with the yarn by wrapping it around and around...and around...and around the letters. Because I wanted this one to look as though it was written in long-hand (script), I had to slip wads of yarn into the small holes that form the s and e. It's not difficult or anything, but it is sort of boring. Not that I'm one to complain about any project that has to do with sewing or playing with thread of any kind. 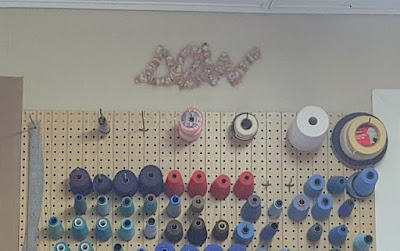 Besides, I got a word from this playing. Sew certainly looks good above my thread, don't cha think?

Join me at one (or all) of the link ups. I visit a few--okay, lots--of other blogs through these linky parties. What fun!
Posted by Mary at Fleur de Lis Quilts

You are so inventive, Mary. This looks great on your wall - are you going to make other words too?

Love it! Great way to use up some yarn, too. Our modern guild's challenge right now is adding text to our quilt projects. It's fun to try but difficult deciding what to say!

That is a very creative and fun way to use that yarn. I think I have seen it in the store and thought it might be difficult to work with or that you have to knit loosely with. I do not knit much."Sew" looks great on your wall. Thanks for linking up with this week's TGIFF.