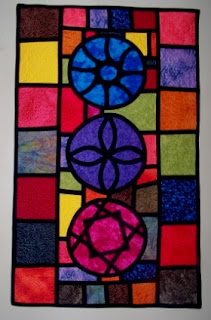 Finished the small quilt I've been working on for QuiltCampus.com (QC).  It's the second one in a series of three that I have plans for.  I want the final quilt to be a triptych of three panels, all near the same size but not necessarily exactly the same.  Side by side, they should match without being too matchy (if that makes sense).  I'll be teaching a class on stained glass quilts and will use this design since it's my original pattern.

Originally I tried a couple of ideas, but they just didn't work.  Eventually I spent a Sunday mass in a different church not far from our home.  The stained glass windows are simple.....squares of different colors and an occasional circle within a square.  I started playing with this idea and finally found what I was looking for.  After I made the first quilt (shown at right) I sent a photo to QC and they approved the design.  I then wrote most of the lessons since I had taken photos as I worked on the first quilt.  Once the lessons were written, I put everything aside for a few weeks to give my brain a rest and to forget the details of what I'd written. 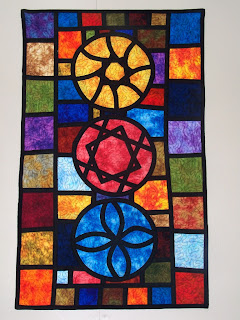 I picked it up again last weekend.  This time I read my directions as I made a new quilt (shown on left).  I tried to find glitches and errors as I worked so that I could correct those.  I discovered a few errors that I now know will need a little more time, but still I think that by next weekend I'll be ready to send the lessons to QC for their perusal.  Then, hopefully, we'll be ready to set a class date and begin working on the web pages.  I am shooting for a summer class and am planning to make the third quilt while the class is going on.  I've found from teaching writing that to work on the same project as one's students builds camaraderie and also lets me see the issues as they come up.

I'm hopeful that a third panel will work as well as the first two did.  It's a fairly easy design that looks complicated--perfect!
Posted by Mary at Fleur de Lis Quilts