Here's a Blue Monday idea--share your blue quilts on Mondays right here on my blog.  Send me a photo of any quilt you've made with primarily blue colors.  You can send your photos to my regular email address (mary.marcotte@gmail.com).  I'll drop it on the blog on the first Monday that comes along after receiving the photos.

And because I'm liking the idea so much, I'm going to start with a Blue Monday quilt of my own.  This quilt is one I started a couple of years ago.  I got stuck while trying to quilt it on my Bernina.  I didn't have the long arm at the time and thought I could quilt and applique at the same time, which I did, but I also decided to use the only batt I had--a thick poly batting that made it almost impossible to do everything at once.  I worked on it till I just got sick of the struggle.  I pulled it out last week and loaded it on the long arm.  It wasn't easy and normally we don't even attempt something so backward, but what can I say, I wanted it done! 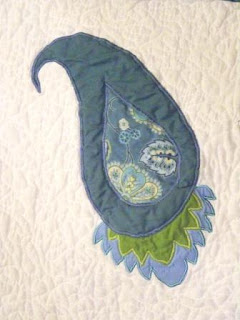 It's titled "Paisley in Pictures" and is a medallion quilt of paisley motifs that I appliqued on.  My idea was simply that I wanted to make my on paisley print.  I know, it's crazy in a way: I could just buy paisley printed fabric.  But, as you can see, I wanted BIG paisley motifs.  I also wanted to play with the idea of creating and having fun designing different paisley patterns.  To stretch the quilt and add to the patterns, I added a couple of strips of additional on one end and another on the opposite end.  I framed the small pictures and the central medallion....and that's where I got the name.  Hope you enjoy and have had a great Blue Monday! 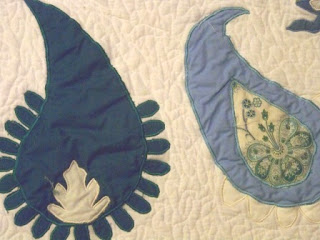 Here are a few close ups of the individual patterns in the medallion: 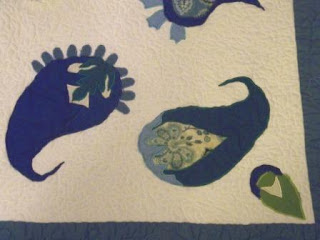 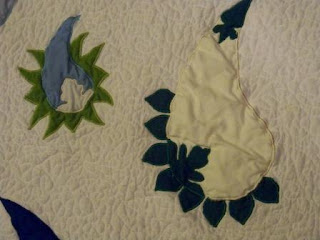