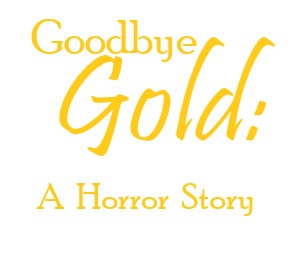 WARNING: This post may be a little gross.  Parental Guidance Suggested - some material may not be suitable for children. AL (Adult language) DS (Disturbing scenes)

I have had gold in the back of my oral cavity for years. And years. This gold cost us dearly at a time in our life when we could ill afford rice or other, much less important, staples. It's been mentioned as a source of equity, though we've never had to cash in.

Until recently. Apparently the price of gold has risen. Enough that the crown decided of its own volition to spend itself. While eating a Little Debbie Swiss Roll, I suddenly bit down on something hard and frightening. Despite the Swiss Roll deliciousness, I spit out the offending rock. The rock was golden and gross. In its place was...nothing. Immediately I became upset at the thought of this great loss and prepared to throw the contents of the paper towel into the trash. My husband insisted that I carefully place the golden rock into a zipper-type bag. Of course, only a freezer-grade gallon-size would do as there were no other containers.

At what must have been 4:00 a.m., my husband roused me from my sleep and insisted that we see a dentist. Gold rock in hand, I sheepishly sat in the dentist's chair and showed him the bag.

"Ah, good," he said, "it is perfect. We'll have you back together in no time." The dentist cemented the golden rock back into it's rightful place, but that would not do. I could not eat for the worry that the thing caused. Within the hour my entire face hurt and my teeth could not reach the food I funneled in. Swallowing whole forkfuls of rice and gravy cause a horrid aching in my throat. By the next morning I was crying to return to the kind man and beg him to remove the golden piece.

"No, no, I can save it," said he. "It is a quick, painless procedure." To set things right the dentist used sandpaper to grind the gold like coffee beans from the crown's smooth top.

Ah, but he was a mean, deceitful adversary and, while he took some of the gold, he left sharp edges, a piece of shovel and one small, pointed fork. Below all this hardware was a void that the remaining gold would use to store sustenance while it conspired to escape once more.

First it allowed the tongue to pry and push, but many hours later the tongue became exhausted and gave up the work. Next the gold set its sights on the cheek. This cheeky fellow pretended to help, but the gold saw through the its impudent ways and gave it a good lashing. Like a child the cheek would not learn on the first offering. It often interrupted the workings of the gold by getting in the way, laughing at it's attempts, or sleeping alongside the gold when it rested.

Thanksgiving turkey quickly found the void and proved itself useful in strengthening the gold. Christmas ham with its salty properties calcified the cement. However, it was the January fireworks which caused the grinding and clenching that would bend the golden savage. Suddenly, the void gave way to an avalanche of crumbling, calcified cement smashing and cutting into gums, tongue, and cheek. Yet, the golden rock remained in its place.

"The crown must be removed," I cried. "I can take it no longer."
"No," said the dentist, "I can save it." But I knew he could not.
Once more he tried in vain to convince me, "It can never be replaced. You must let me try."
"No," I responded with tears in my eyes. "I shall see an oral surgeon who will do whatever it takes to remove this insidious gold."

Two days later I received the call. "Today. 3:00. A place called AOS. Do not be late," said a sinister voice. I know not whom.  Though it required much investigation, I deduced the place where the surgeon does his barbarian work and begged my husband to drive me.

"I cannot go alone. I am terrified and fear that I may not return," I cried. After much begging and pleading on my part, he relented and angrily snatched the keys from my hand.

We arrived at a large, dark building in the middle of the city. I know not where as there were many twists and turns, and I could not see out the window crouched on the floor as I was. After much cajoling, followed by many curses and threats, the love of my life forced me from the car.

He then pushed me into the building where the windows were tinted and covered with heavy blinds. Tears streaming down my face, I signed form after form. Perhaps I am signing my life away, I pondered, but nothing mattered save the removal of the golden rock.

I alone was allowed beyond the heavy door and lead down a long hallway. I was placed into a machine that spoke to me in an eery, other-worldly voice before enclosing my head in a contraption that swirled and turned until I was dizzy. "Open your eyes," said the tomb-like echo, "and back away from the machine." In a trance, I did as I was told.

Before I could gain self-control, I was taken to a closeted room where I was interrogated for what must have been hours. Relenting, I provided the answers they wanted and was moved to another, smaller room with a couch where I was to lie in stillness. Without warning, the chair moved and I found myself in a position akin to hanging upside-down. I held onto tiny bars, knowing I would land on my head should I fall.

A man laden with instruments of torture, calling himself "Dr. Smith" entered the room. I squeezed my eyes shut. The woman next to me forced my mouth open and placed a vise between my teeth. Ratcheting my mouth open until I was certain my jaw would break, she said something incoherent to the surgeon. The words they spoke were of another language; I understood nothing.

Dr. Smith proceeded to stick me with what may have been needles for I felt them probe deep inside my gum, beyond the area of the gold. My brain bursting, I lay quietly, though surely I trembled in fear, tears forever streaming.

I never lost consciousness and sensed that I was aware of everything that transpired, though I can remember nothing of the episode from the time that Dr. Smith began his hideous work. There may have been some sensation of pressure or pulling, but I will never be sure.

At some point, I was brought upright and Dr. Smith questioned me further. There was an abyss where the gold had once been. It bleed but strangely I did not feel pain. Eliciting my secrecy, someone gave instructions for my care and showed me the door and I wandered into the bright sunlight, where my husband found me mute but seemingly whole. As we sped from this place of agony, we looked at each other stupefied but, speaking not a word, we wondered...where was the gold?


Link Ups!
A finish, though not a quilty one.
Crazy Mom Quilts (Finish It Up Friday)
Confessions of a Fabric Addict (Can I get a Whoop! Whoop!)
Posted by Mary at Fleur de Lis Quilts

Mary, this hilarious! Dark like Poe, but funny. I could just see the assistant jacking open your mouth. It does feel that way sometimes. Great writing!
Debb924@yahoo.com

I have a metal detector. Shall we search for your gold??