When all else fails... 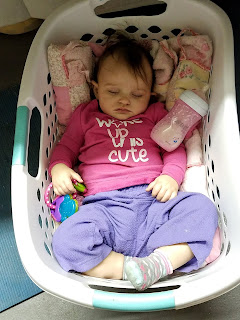 take a nap in a basket. Somehow I got saddled with a great-grandbaby who has the sweetest disposition. Until it's naptime. Do not think you can disrupt her beauty rest.

There are lots of things in the studio, but not one baby bed, play pen, or pallet. So we had two choices: go take naps in the camper (which included my leaving the sewing room) or improvise. Basket and quilt to the rescue. And there you have it. Who would ask for more?

Plus, one more little detail: sweet baby does not light in her eyes when she sleeps. Therefore, I tucked her basket under the worktable in a bit of shadow. It took about 30 seconds for those sweet little eyelids to close. How cute can a baby be? This cute!

So while she was getting some well-deserved rest (I'll explain why later), I got busy with some more scrap busting. Today was red. I've run out of beige and brown scraps. Go me! So I thought I'd make several of those big 15" blocks in red to increase the size of the quilt. I may not have enough red scraps for the four blocks I was counting on. We'll see.

In the meantime I thought I'd explain how get every inch of scrap out of my scraps. I know, right? Can't let a little waste go to waste. Or something like that.

Really this just explains how I deal with triangles that don't match up. Somehow I get lots of those. Let's not try to figure why that might be.

After sewing the two triangles together along the bias cut, I put my ruler on it to try to figure out how best to cut it. Now if I wanted a square cut on the grain, I'd simply lay my ruler as in picture A above. The 45 degree line is exactly on the bias, so I'd get a nice 5" square.

But do you know me? I am not a square kind of gal. So I tried other options. Turns out if I wiggled the ruler a bit, I'd get this set up, as in picture B. Now, the square won't be on grain, but who needs a grain line cut when she's playing with scraps? Certainly not I!


So I cut my "square" off grain and inched out an extra, I don't know, 1/2 inch and an interesting little something. The piece really is square. Really. I just took the picture at a wonky angle. Maybe I wanted to confuse myself, which I did, of course. I compared the pictures to determine this is the final cut. Geez, I need a photographer. 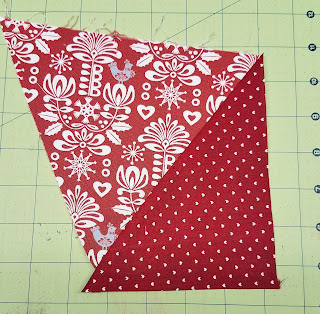 Moving on. I had these two triangles. Not much of chance that they would ever match, so I just sewed. This is the result of not looking at what you have. No matter. I can work with anything. 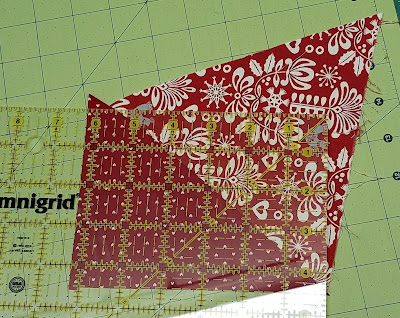 This is what I did. Using my trusty ruler, I decided to cut a rectangle? out of the biggest part. 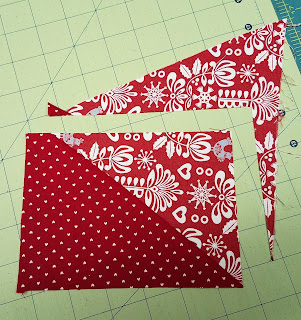 See how well that worked out? Now that other piece. I had to get at least another bit from that. So... 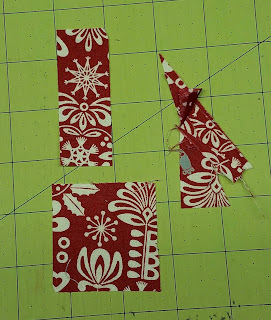 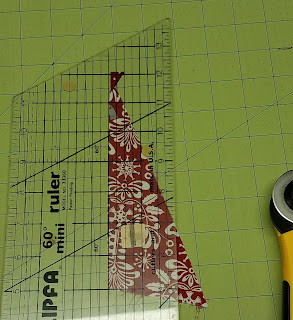 Ta-da! I actually got two pieces. First I cut the larger piece from the bottom. Then, another two cuts and I have a skinny piece from the top. I should tell you that this little triangle of very pretty fabric is the only piece I had. That's a lot of incentive to scrimp out an extra inch or two. 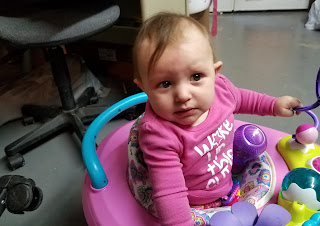 And the last thing on the agenda: why Milly needed her nap. We sat on the concrete floor and picked thread out of the chair wheels. She worked very hard at bumping into me while I picked at thread and hair using tweezers and one of my best seam rippers. (It's the only one skinny enough to fit in those tight spaces.) 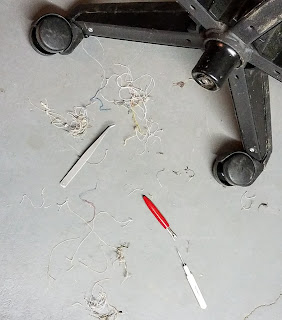 DO NOT DELETE!!! ROFLOL

Just wanted to warn you that I was back reading your blog. LOL

Have a fun day.

What a honey she is! And I always found there's nothing like a sleeping baby for helping me focus on what I want to get done.

That is definitely a photo to keep forever. Amazing how we can always find something to make do.
Great work with all your scrap cutting!