Buttons and Thread and Scissors! A finish!

You might think that decorating for a high school prom would require pretty useless skills. After all, there are very tight budget restraints, few knowledgeable workers and, least of, ridiculously cheap props. This post reminds me of those days of building props. Some for Beta convention and other events, but the heyday of the prop-making scene is Prom. Days of cutting and gluing and painting and hanging and, whew! I don't want to think of any more to-dos from those days. 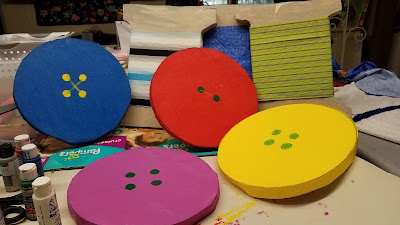 Instead, let me tell you a story:
Last month a lady called asking for help to decorate a storefront for our guild. Cottonport wants to decorate all of the storefronts on Main Street to show-off its non-profits. The hope is that it will generate a buzz about some of the good aspects of the town and encourage people to join in civic pride. 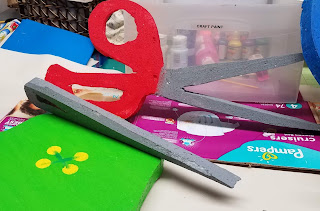 The Cotton Quilters' Quilt Guild is a non-profit that really doesn't belong to Cottonport, but we use its facilities and there's that name connection. Anyway, at the last guild meeting we brainstormed ideas for complying with the request. 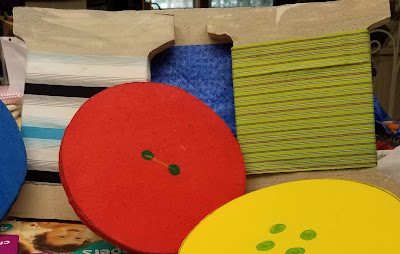 Enter prom skills. After mentioning how I cut styro-foam sheets to create prom props, one member volunteered a few pieces of sheets she was planning to throw away. Someone else offered craft paint. I offered to cut some shapes. Someone else painted. And so it goes. Much easier than I remembered.