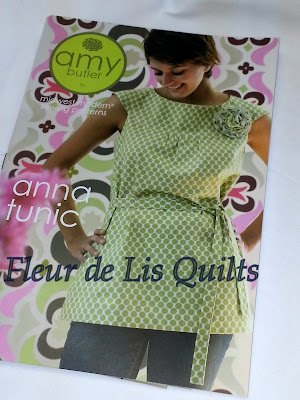 A few weeks ago I had an opportunity to get to Lola Pink fabric store in Lafayette and picked up some beautiful modern fabrics.

I noticed the owner's cute top while she cut my fabrics and asked about the pattern.  It's from Amy Butler and they happen to have it in stock.  Lucky me!  Of course, it was added to the growing pile on the counter and about $80 later, I left with a nice little bag of goodies. 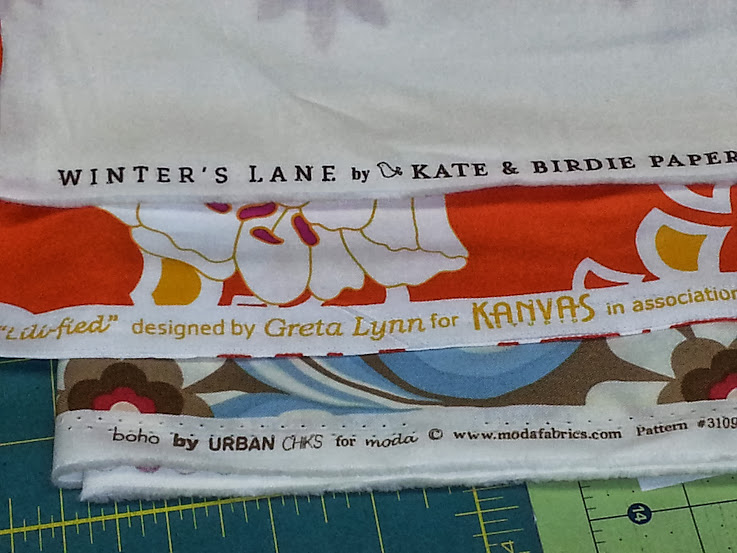 The fabrics are beautiful quilting cottons from name-brand companies, such as Moda.  Lola Pink can be trusted for high quality, bright modern cottons--good reason for my regular visits.

Since hubby was in the field most of the day and there were no grandchildren to get into things, I took early advantage of the quiet and the pretty blue and brown Moda fabric.  Eight o'clock is early for stitching--at least it is for me.  But by that time I'd made a pattern from my favorite skirt and was cutting into this pretty pile. 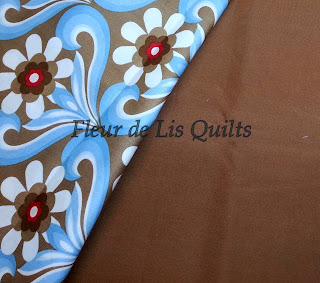 Deciding what to make with it was easy enough.  I'd used the Amy Butler pattern last weekend to make this pink and black polka dot top.  I got compliments from someone at church, a teacher at school, and a guild member at the meeting on Monday.  I consider it a winner.  Here it is about to be tossed into the washer. 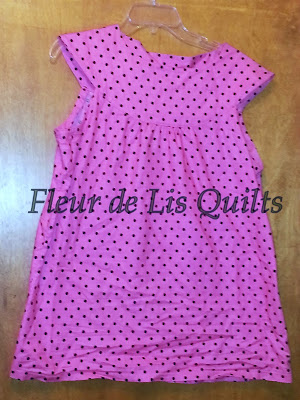 Besides, I'd made a few adjustments to the pattern so that it's relatively cool since the air conditioning in my classroom is sporadic.  Instead of lining the top, I made bias strips to finish the arms-eye and, because the fabric is such good quality, I didn't put in interfacing.  It's also loose and flowy so that the fabric doesn't stick to me.  (Having ADD means needing to be comfortable because bothersome clothes are very distracting.)  I promise I ironed it before taking this picture, but lunch called me away.  In the meantime the top slipped off the counter, a puppy made the discovery, wrinkles are the result of a puppy tug-of-war. 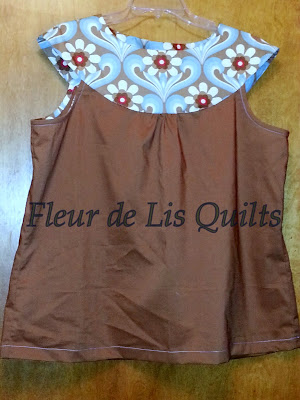 And there you go, not a bad Saturday of sewing.  After finishing this outfit, I replaced the zipper on that favorite skirt, since I broke it while getting dressed one morning this week. 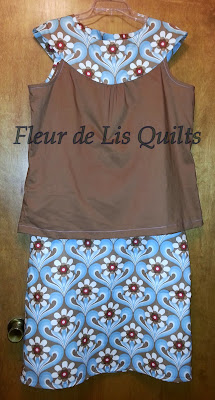 Replacing the zipper took almost as long as making this skirt, but I figured out a tip that I thought you might appreciate and can apply anytime you're making repairs that are difficult.  Use a thread that matches closely but not exactly to the thread already in the garment.  This way you can more easily find the one that needs ripping should you make a mistake.

My zipper looked great at first, but then I saw that the waistband seams were slightly off, and the zipper needed some adjusting.  Because I was using a very light bluish white (just barely a tint of blue) rather than the bright white in the garment, I was able to pick out my seam without disturbing a nearby seam. 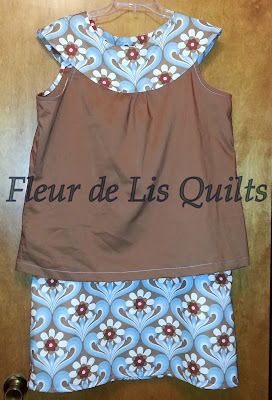 I came to the idea of using the off-white while ripping out the original zipper.  It was very difficult to tell which seam I was ripping.  Only one seam held the zipper in place, but a second seam kept the loosely woven fabric from coming apart and I didn't want to weaken it. Once the broken zipper was out, I knew there would be a chance that I'd have to do a bit of ripping and decided that an off-color thread might help.  I was very glad to have that hint of blue.  In fact, I might have been tempted to leave the mistake in.
Posted by Mary at Fleur de Lis Quilts