a problem-solver and a few problems

Only two days ago I wrote about a project that had me very excited.  I'd covered the top of a table with an old map that I'd stolen from Richard. (He did not care one bit, so I guess it wasn't that important to him.  I could have stolen the map I wanted.) 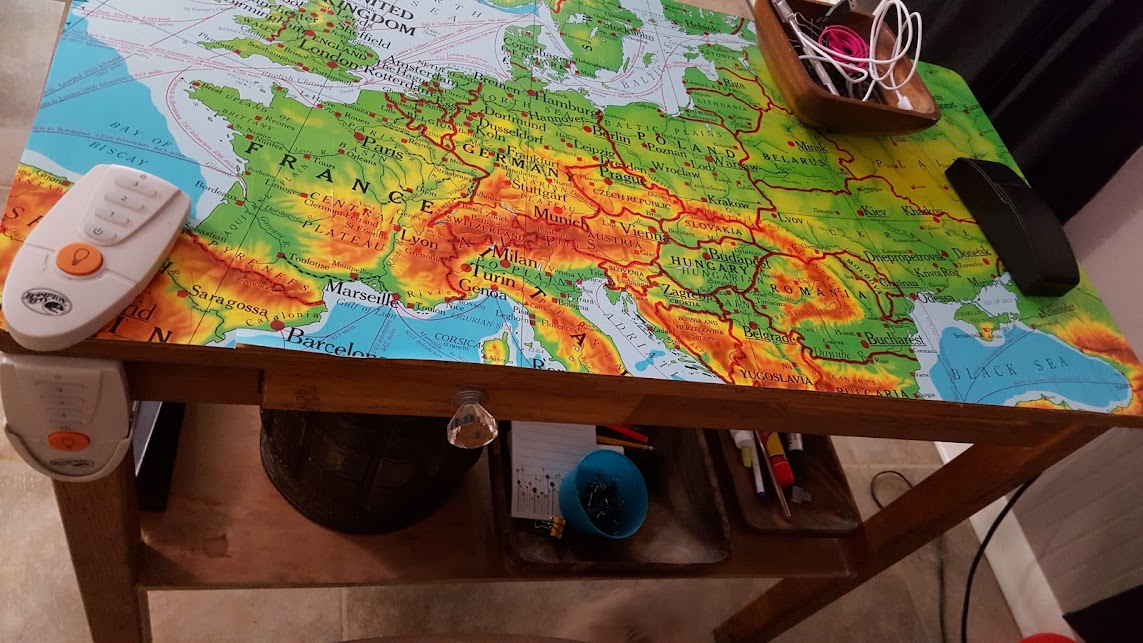 That map table (the grands named it that) is pretty awesome. Except that I'm noticing some issues already.  The vinyl cover on the map is already unsticking.  Now what to do?  So I gave the problem to Rich, who loves it when I call him "The Problem-Solver."  I don't mind.  He is a great problem-solver.  And if it gets him to work on something I want solved, so much the better.  So today he decided that the best solution would be to get a piece of plexi-glass and let that hold the map down.  It would also keep the map clean.  And maybe protect it from the puppies.

0%
N 3 mph
There's another problem blowing in: a nor'easter or something like that.  Cold.  Ice.  Freezing temps. Burst pipes.  The works. It's bearing down and coming quick.  We are not ready.  We never are.

We live too far south to really ever be ready for the first freeze. The fact is this morning I was beating off mosquitoes in 70 degree balmy weather.  I was also running a little fever from this stupid-won't-let-go-of-me cold, so it didn't necessarily seem prudent to break out the wool coat.  A trip to Alexandria for another shot for said cold, and we could feel the change every time we stepped outside.  By the time we returned home, at 4ish, I was thinking I should keep a quilt or two and maybe even a sweater in the car. Just in case.
It was cool enough to remember to bring in the plants.  I slept off the shot while Rich tended to the chickens, the plants and maybe a pipe.  I really don't know what he tended to, honestly.

Whatever it is that he tended to, it was in good hands.  Much better than my own, of course, since my hands were clutching the softest lap quilt in the house.