One of the wonderful advantages of living in Louisiana in the summer is that, if you don't mind watering, plants do really well. 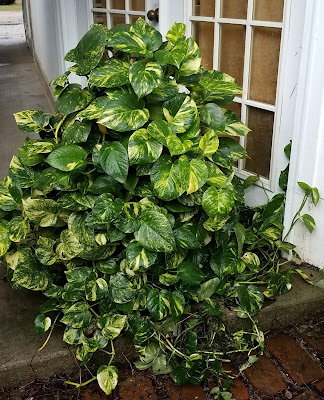 Extremely well. I have to regularly peel it off the door and bricks because it roots itself to everything. The older leaves are huge and the vines are easily five feet long, from where they touch the floor. I haven't figured out what I'll do with them in a few weeks when it becomes really cold. 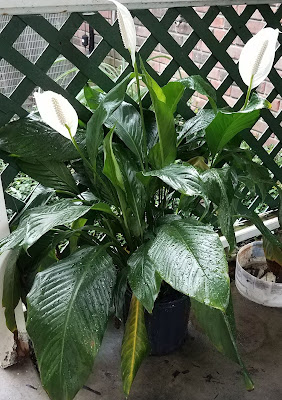 Also on my back porch is this beautiful peace lily that Richard's mom gave me after his dad's funeral. It was in a basket, but that rotted and fell apart so we're down to the black nursery container. I've been considering re-potting it but I need a larger pot. There's probably one around here somewhere. 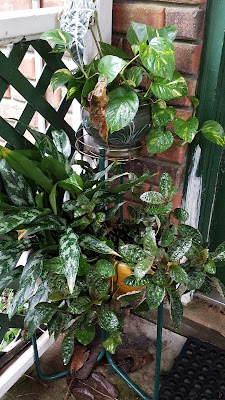 Next to the peace lily are these three pots on what is perhaps the cheapest stand ever. I have to be careful when I move the pots so that the weight of one doesn't tip the whole thing over. It's crazy, I know. But they look great stacked up in that corner by the back door.

At the end of the parking area I have a couple of huge pots around a crepe myrtle tree. The tree just came up on its own and grew really quickly. It does not match the other white crepe myrtles on the other side of the drive, but anything that finds a place, plants itself and grows beautifully gets to stay right where it chooses. 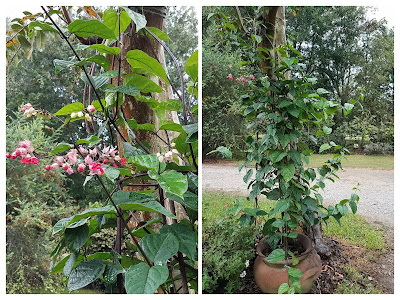 So this plant is a pink bleeding heart. It's doing really well. It bloomed profusely in the spring when I bought it, got a bit exhausted during the heavy heat, but is picking up energy and put out a few blossoms. 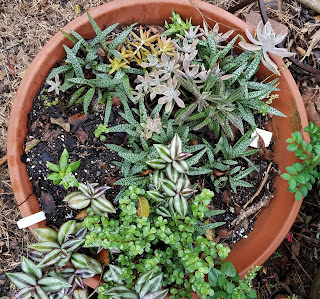 I'm trying again to build a succulents pot. It won't be completely filled by the first freeze, but I've gotten much closer than I did last year. I had labels on all of the plants but they've been lost, along with a couple of really unusual plants. 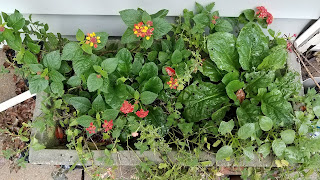 On each side of the very ugly front door to the studio I have these concrete planters with dalia, penta, verbena, and lantana. They are also coming back now that the heat is abating just a little. The one thing all of the plants have in common, besides being able to handle the heat, is that they all have some shade of reddish/orange. Last spring they looked great when everything was blooming. 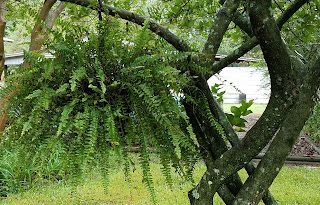 And finally, these two ferns that Rich and I bought to place on the altar for his dad's funeral are hanging out on the ligustrum shrub, which is a really small tree. Occasionally we set them down on the ground to water them. They've lost lots of leaves and are beginning to look scraggly but I'm hopeful that they will recover before I have to bring them in. 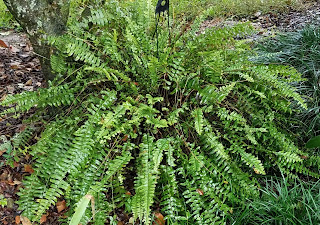 Speaking of bringing them indoors, I've decided to put them on a table in the studio close to a window that gets morning sun. I want to bring them into the house but the babies are here too often and Ryder put everything in his mouth. I don't know if any of these are poisonous but I am not even considering taking a chance that he might eat one. 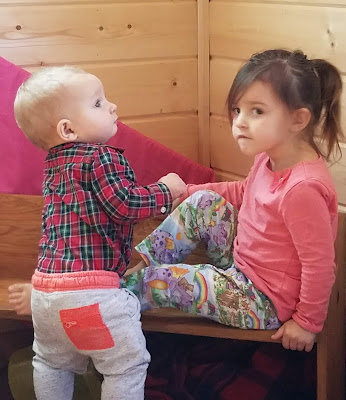 Here are two of our three little stinkers. Ry on the left and Meme on the right. See that look on her face? That is her you've got "one shot at this picture" face.

Your garden is flourishing. So lovely to see all the greenery around.