I am well started on Erica’s commissioned quilt.  It’s such a pretty quilt based on one she happened to see in my Etsy shop some time ago.  She asked me if I could make one in queen size as a wedding quilt for her upcoming nuptials.  Of course, I agreed and we set to work. 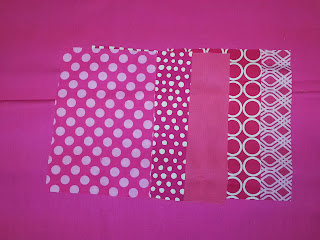 She chose the majority of fabrics, but I added a few that I picked up in Houston that have a modern edge to them.  I love the mix of hot pink and touches of lime green and red.

Don’t they play well together?  Could they be even a smidge more girly?  If so, I don’t know how. 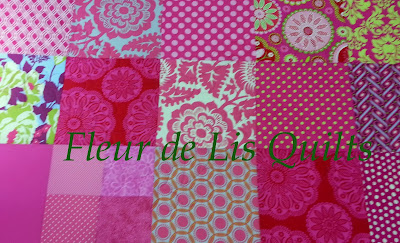 On Saturday I got busy and started cutting squares.  One small package arrived already cut into four inch squares, but that was too small, so I stitched them into seven inch blocks and cut all the other squares 7 ½ x 7 ½ to match.  Then the fun began.  Although I was careful not to put two squares together, it was really a matter of throwing two squares together and chain stitching as fast as I could. 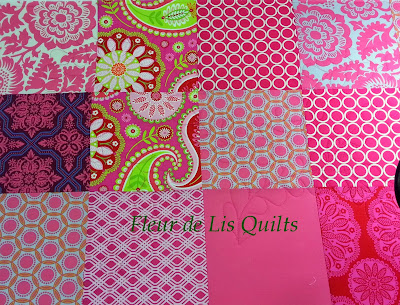 Today I started matching rows two by two.  I ended up with an occasional “aww, two like ones together,” but it’s not too bad.  Tonight I am almost ready to load it onto the long arm.
Happy Quilting,
Mary
Posted by Mary at Fleur de Lis Quilts