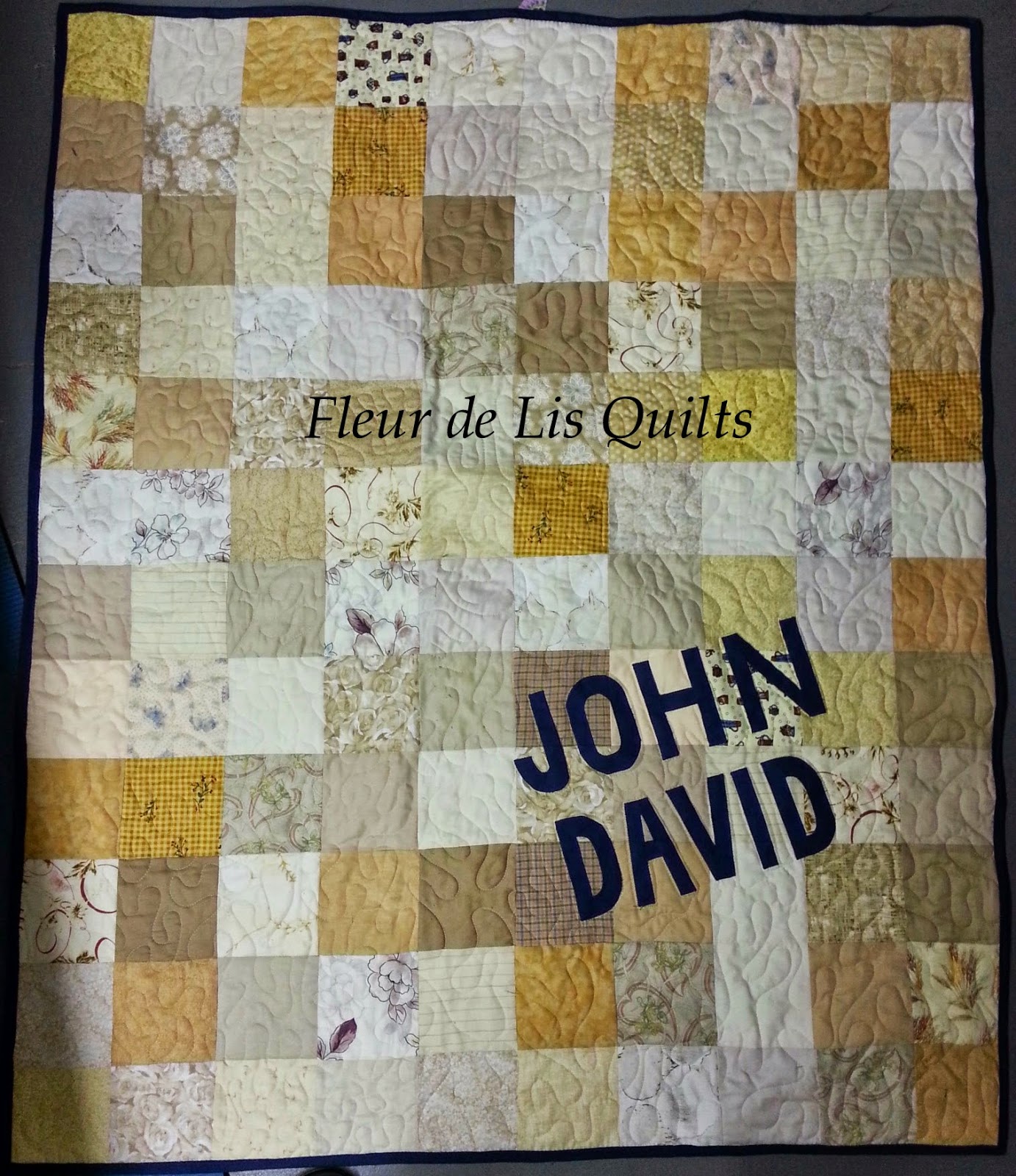 Another little quilt is finished.  I added John David's name applique, quilted and added the binding.  Even the label is on! 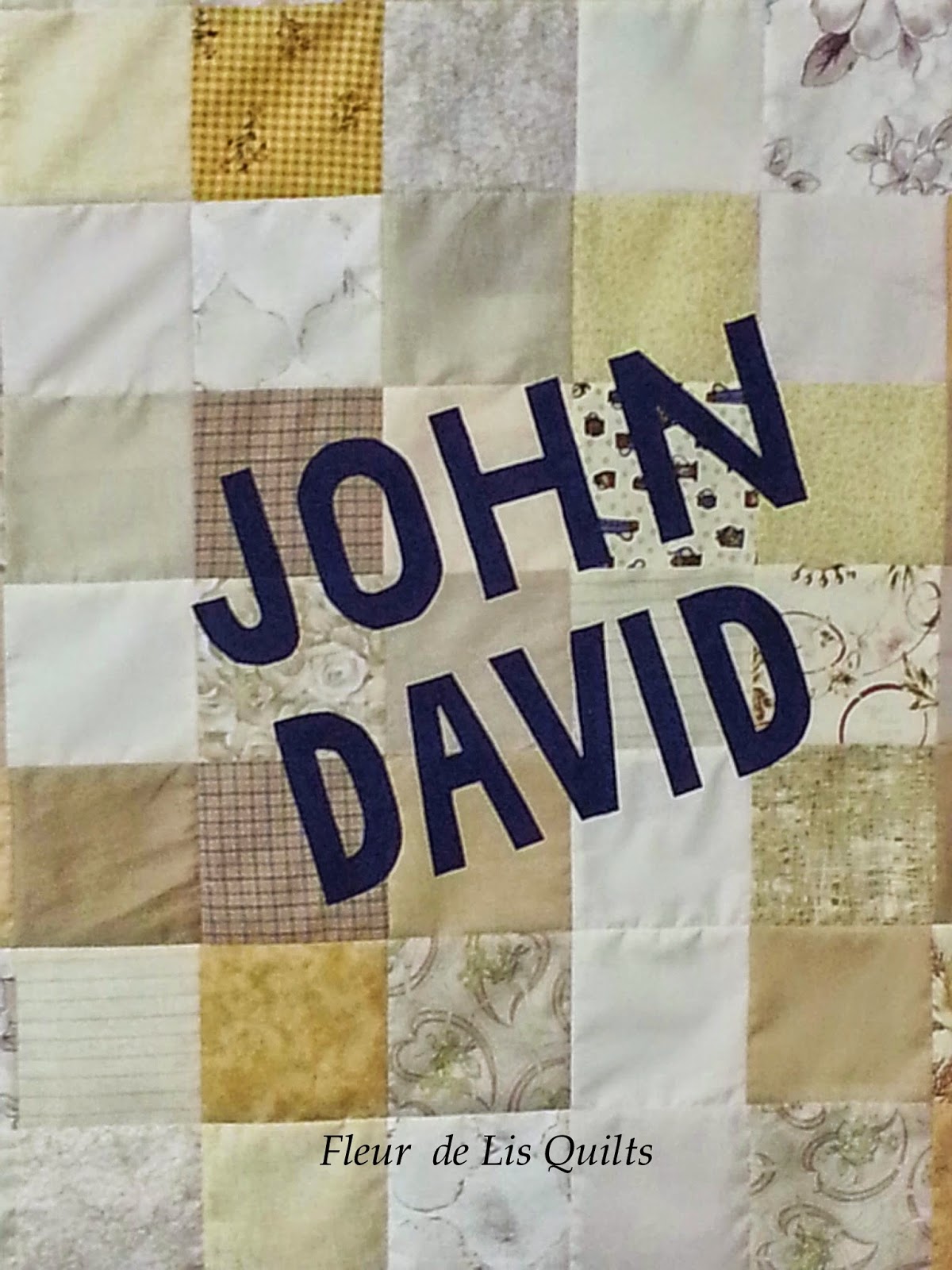 Today I have a tutorial for making and using a base stencil so that you can create letters for applique and paper crafts.

First, you'll have to make the stencil. It's relatively simple but you need a few supplies: paper, ruler, pencil and eraser, and good cardboard (such as the cardboard from a cereal box) and something round for drawing circles. 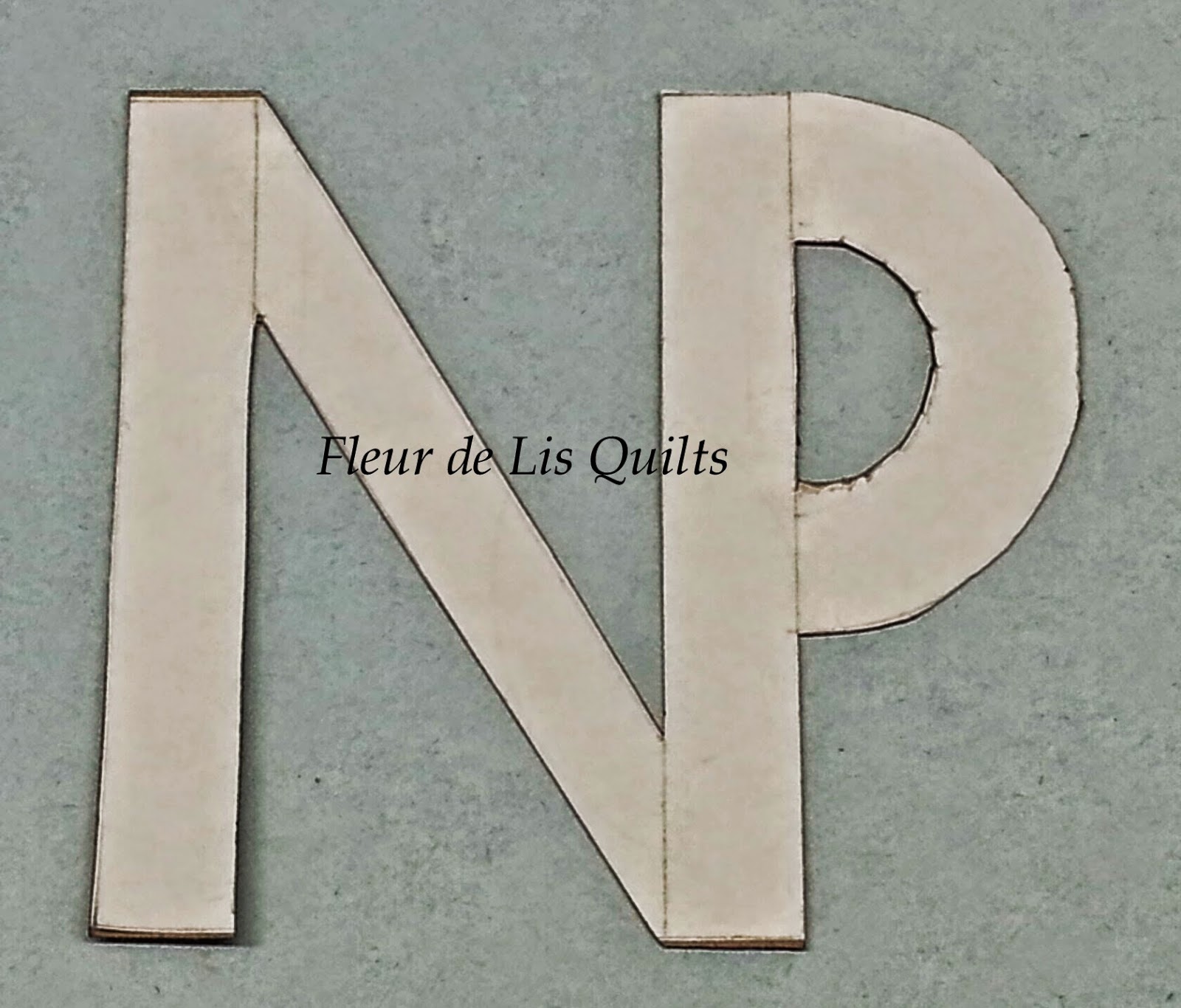 Decide on the height of your letters.  I chose four inches but it's possible to make your stencil any size.  You'll make the shape in the picture, which I think of as an overlapping "N" and "P."  If you want to try a cursive shape, by all means do.
The width of each line is 3/4 inch, except the slanted line.  I always make that line just a smidge smaller.  In this case, probably 1/8 inch smaller.  I can't draw a circle, so I just use something round that is about the size I need.

I use the ruler to draw the straight lines first, connecting them with the slanted line.  Then I draw in the half circle using a cup or bottle.  If you have some other circle-making tool that will work also.

You'll use the stencil for every letter, so once it's made the letters will all look the same. This stencil has been used for several letters in the two days since I made it, so it looks pretty rough.  After drawing the shape, I glue it to cardboard to give it stability.

(Note: I will occasionally write letters without the quotes just speed things along. Forgive me, please.) 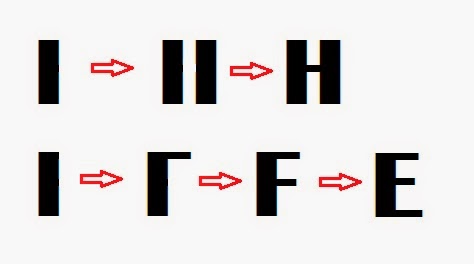 Ready to begin making letters? Of course, it's easy to make the straight lined letters: E, F, I, H, L, etc.  The way to make these letters is to use the stencil's straight lines, moving, turning, and adjusting them as necessary.  For the H, first draw the two vertical lines, then connect them with a horizontal line.  I use the same stencil "leg" for all of the lines to ensure that I have the exact same size for all parts of the letter.

The letters with a slanted line are also easy since you have the slanted line to work with.  "N" is made exactly as is in the stencil. "M" is made first with the left most side and half of the slanted line.  Then flip it over and make the mirror image.  In the picture above, the middle letter is separated so you can see how it's formed.  I generally make the M about the same width as N.

"A" may be a little difficult since you may want to adjust the angle a bit.  I don't like the look with slanted lines spread to far apart.  Once the angled lines look good, just add the crosspiece. 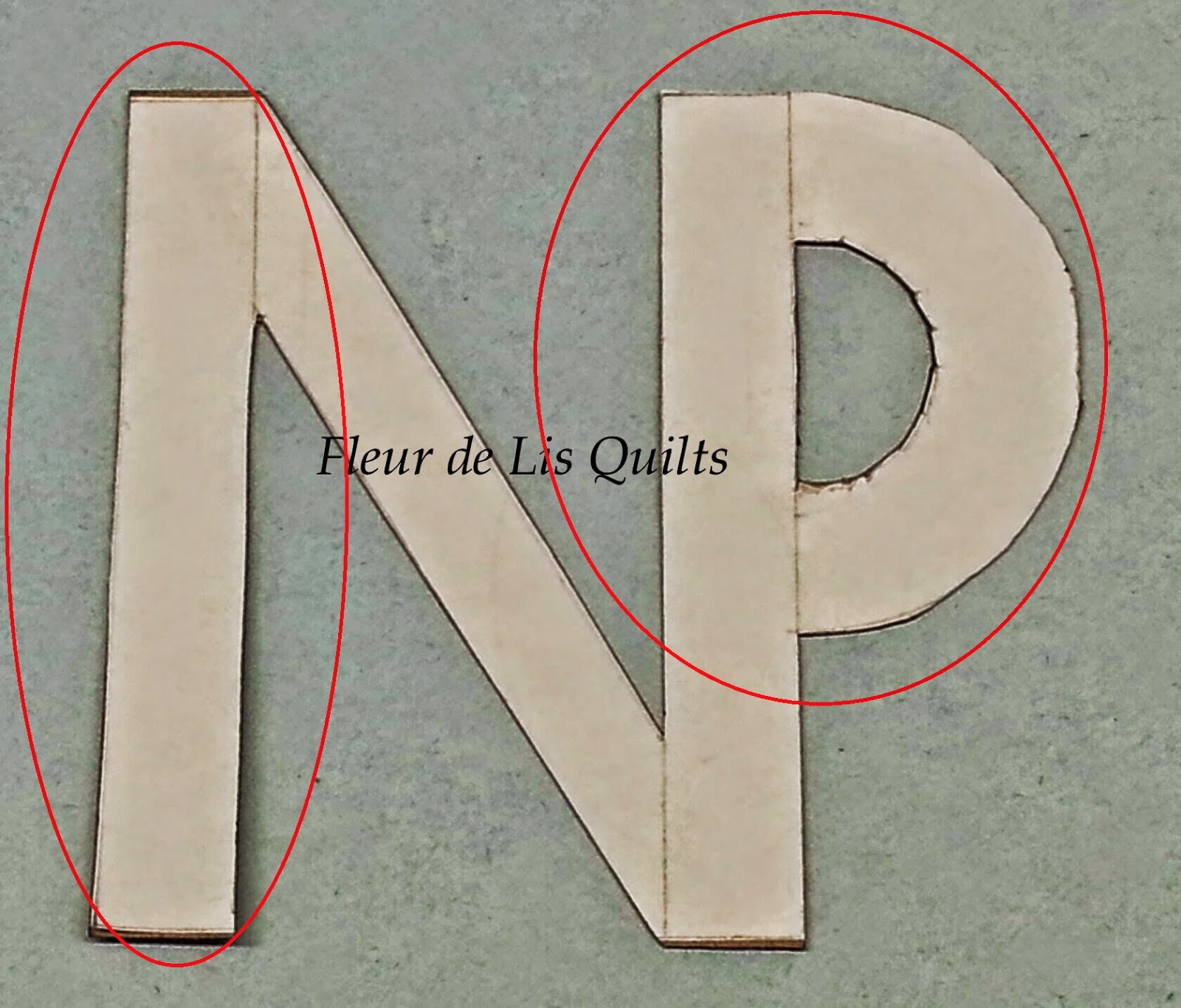 Now let's work on a few difficult letters: the round ones.  B, C, D, G, O and so on.  You're going to depend on two major the parts of the stencil, the rounded part and one straight line.  The rounded part, of course, will make the top and bottom of the O, but they are connected using the straight line.  P, naturally, is on the stencil so it's easy.

Flip the P and you easily have the lower half of a B.  If you use just the top of the rounded part to form all but the middle of the B, you can connect them to form a D.

So how to make the really rounded ones, like O?  It takes a minute or two.  Use the rounded part to form the four corners, then connect the top and bottom halves with the straight line, just as you did with the D. 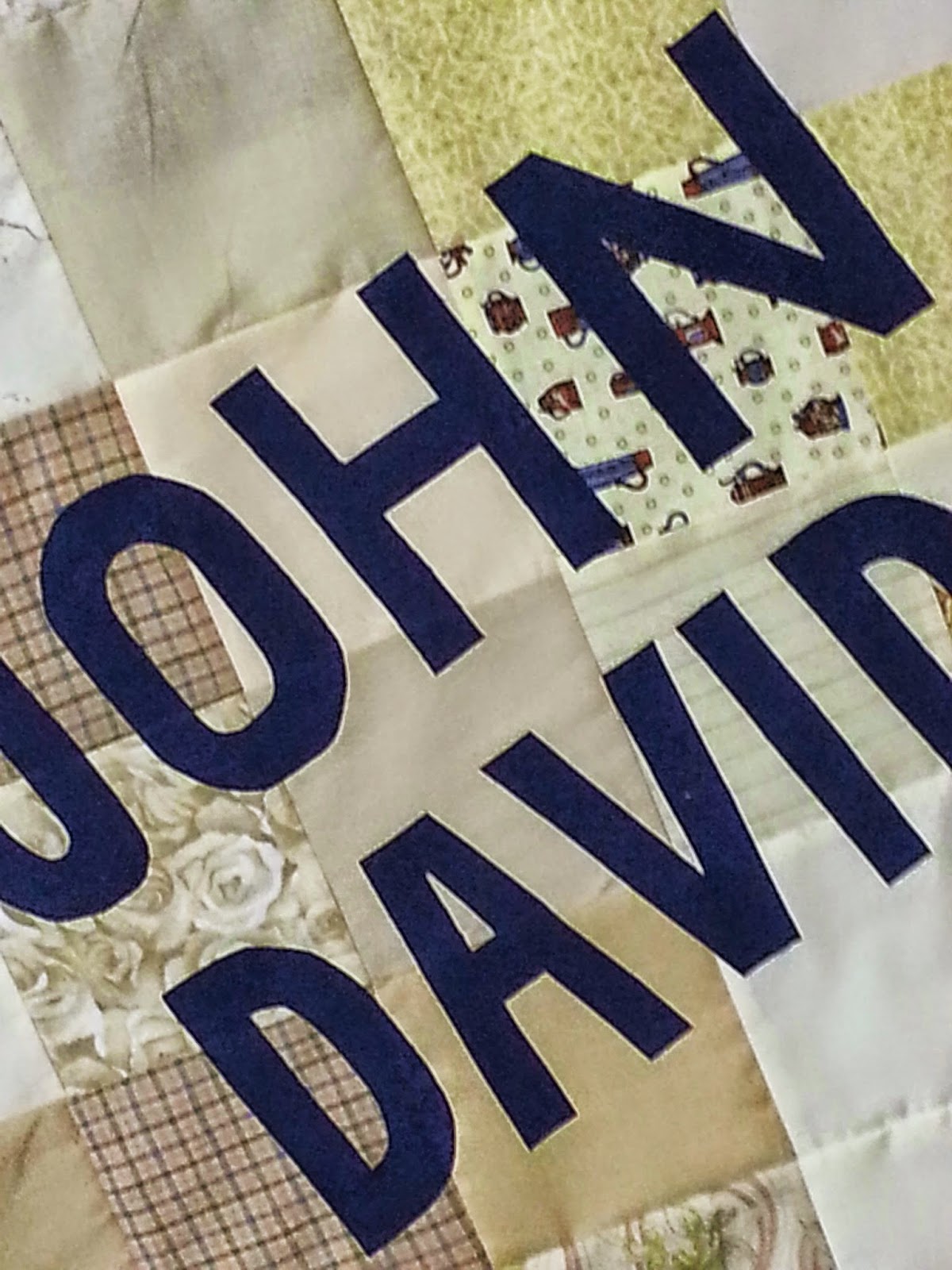 Letters and numbers are basically the same.  I made a sign for Richard that included his full name and phone number using just this stencil.  I also used the stencil to form the letters for John David's applique quilt.

Of course, you can always buy stencils for your applique letters, but this is much more fun, and you don't even have to leave home.

What a sweet quilt - simple but really effective. I love your colours.