The Quarry ~~ Finished, Some Fabric, Some Pincushions

Not so long ago I got a sweet note from Mari at the Academic Quilter to inform me that I'd won some fat quarters in her give away. Now you know that getting some fabric is always a thrill, so I'll start off by saying, "Yay! The fabric is beautiful! And thank you, Mari." 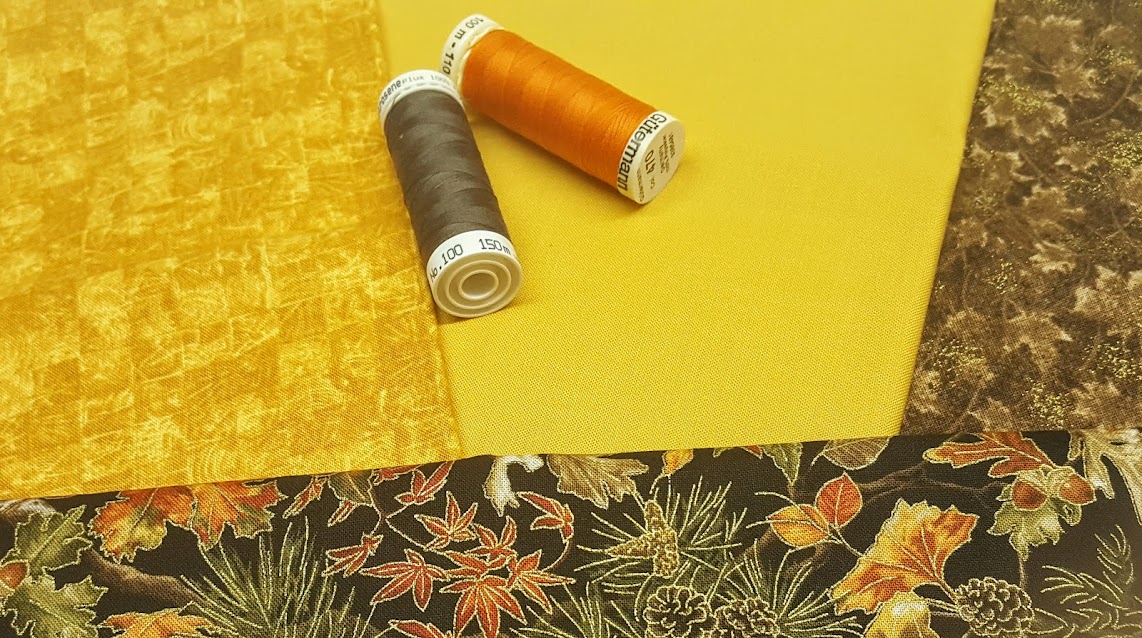 I think it came in on Wednesday night, but I was at the hospital since Richard's dad has been very sick. That may have been the night he had surgery. Then last night I worked at the high school basketball jamboree until everyone else had gone home, which is way too late for me! But today! Well, today I found a package on the kitchen counter and opened it to find these lovelies! Oh, and her sweet note! 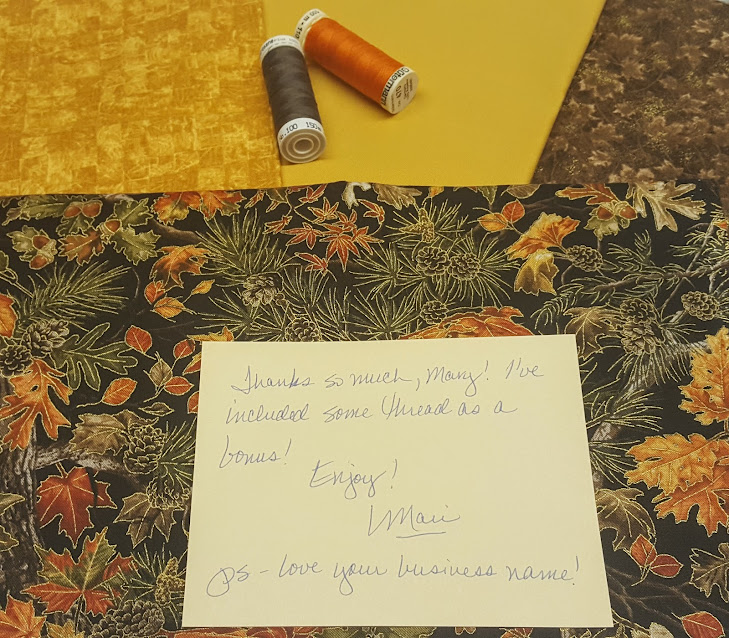 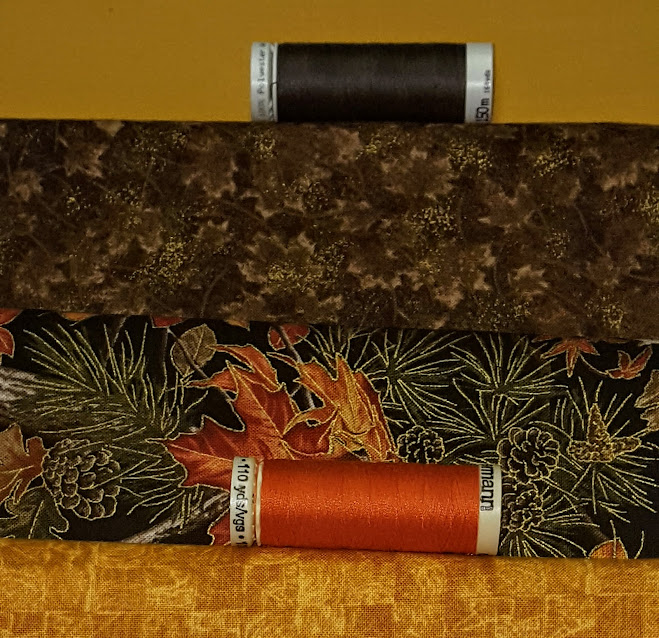 So that was a great way to begin my day. Not long after Richard called to say they (his parents and he) were on their way home from the hospital, which means that he will be home tonight. 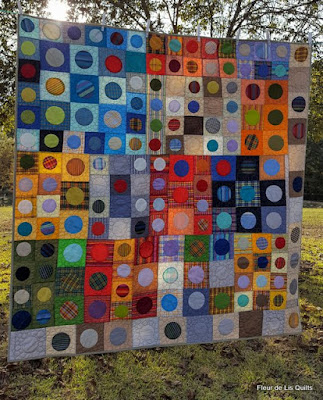 This afternoon I went into the studio (always a big yay! for me) and played with a few pincushions. Then managed to find a ladder (not in the studio, but that would be great) so that I could take photos of two of my most recent finishes. I'm showing "The Quarry" tonight, but the other one will have to wait a few days. The customer will be picking it up early next week and I promised to keep it quiet until then. 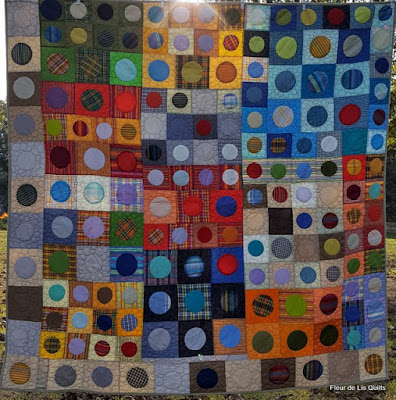 This quilt includes almost all of the Quilty 365 circles that I've created in the few months that I did participate. I started out strong, but way behind, and fizzled out quickly, with about 165 or so circles completed. I used a few on a small quilt that I made in May. I'd had the idea to use the circles in a window quilt that eventually went to Adam since he owns a construction company. 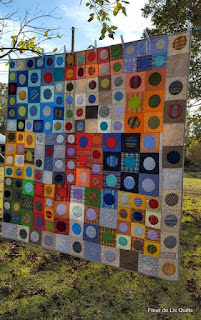 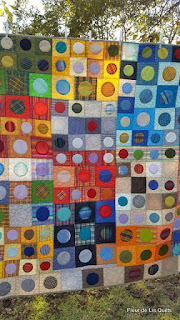 Although I was skeptical at the beginning, I really like this quilt. As I was quilting it, I kept thinking of a quarry that we saw while traveling over the summer. I had already decided to quilt circles in a variety of sizes, but the name just kept coming back. Eventually I gave in and the quilt won. 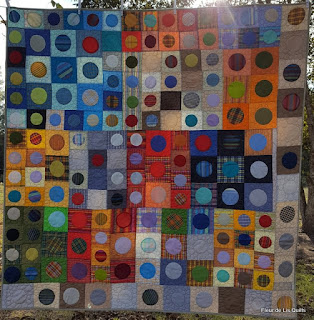 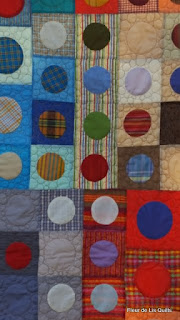 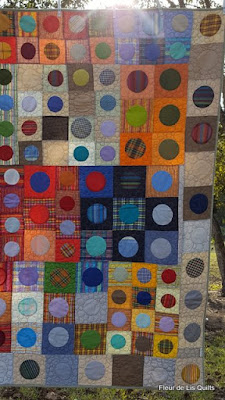 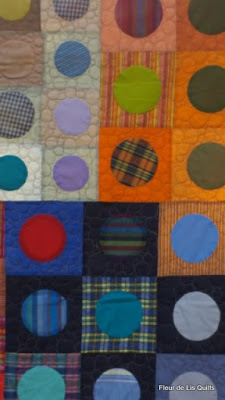 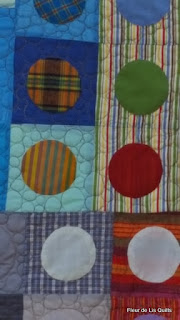 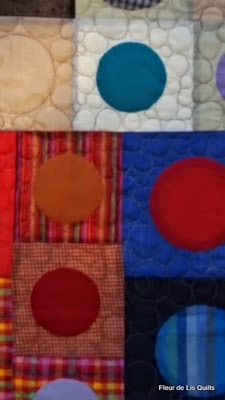 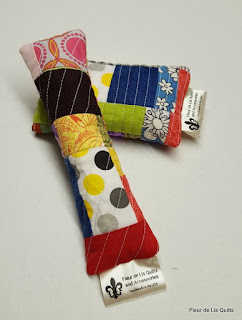 Remember that I said earlier that I played with pincushions? Well, I did more than play, I finished two. One is a long skinny version to sit in front of the machine and the other is a regular, everyday version. 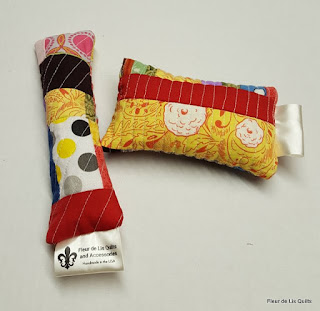 You may be able to tell that I sort of cheated on these. The fabric slab was left over from a previous project. All I really did was to make a quilt sandwich, sew one line down the middle to hold it together and cut it in two. I quilted the two pieces separately so that I could quilt them differently then make the pincushions. 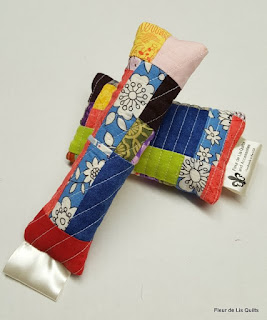 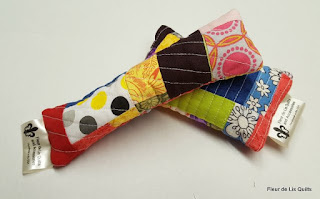 I used walnut shavings for the filling, so there's a good weight to them. If I need pattern weights, these will easily fill in the duties.

What is your finish for the week?

Needle and Thread Thursday at My Quilt Infatuation

"The Quarry" looks awesome! I really like how you grouped warm and cool backgrounds together and added more circles with quilting. I'm sure you quilted more than 365.

The "Quarry" quilt is wonderful, love how you quilted it.

Love the quilt! And the pincushions! I am not sure just why the skinny ones appeal to me, but they are my favorites. :)

Quarry is gorgeous! I missed the beginning of the 365 circles thing, but noticed many participants have decided that fewer than 365 seemed to be plenty. Your quilt is proof that 165 is perfect :)

lovely projects - thanks for sharing

Your new quilt looks wonderful. Great colours and the quilting is just right. Just imagine how big it would have been if you had kept making blocks!

I love The Quarry! It makes me feel happy just looking at it. You've got both the colours and the various-sized circles balanced just right. I think the best thing about the circle project has been how people have made it their own, not felt too tied down by the original parameters, and your 2 quilts exemplify that perfectly.

Wonderful work! Thanks for linking up to Finished or Not Friday!

I love your Quilty 365 Quarry quilt and how you quilted it. I loved this project and have over 400 blocks. It's a hand sewing project while watching sports. In 2017, they will become quilts. Looking at yours has been an inspiration.