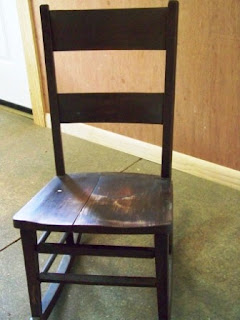 Am I not one lucky girl?  My in-laws have been visiting us daily to check on Richard's progress from surgery. They generally stay for an hour or so, and we have a wonderful visit.  Naturally, with a week and a half behind us, we've had lots of time to catch up with the family and even time to chat about almost everything we can think of.  At some point we began talking about the many antique tools they have, and I told them about my hopes of finding an old sewing rocker, one without arms.

Low and behold, they had exactly such a rocker.  My mother-in-law picked it up at an estate sale about 20 years ago.  I had no idea that she had found such a beautiful rocker, although I was very aware of their love of wooden rockers.  They have a few, although it's not really a collection because rockers take up too much space.  Who would have guessed? 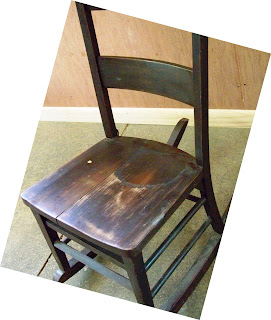 It turns out that neither of them knew this rocker is a sewing rocker.  She simply bought it because it was unusual and old.

Here's the best part: they delivered it to me the very next day.  They decided that since I really appreciate antiques and want such a rocker that I should get it.  Now isn't that sweet?  They have never used it....which is one reason that I had no knowledge of its existence. 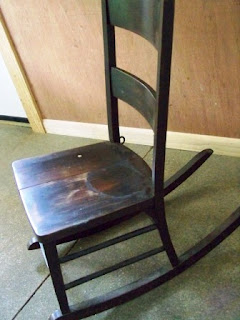 It's in pretty good shape.  There is a split on the seat that someone tried to repair once.  But that split is right in a seam where two pieces of wood were glued at one time to make the seat wide enough.  My darling husband has promised to repair it correctly when he is well again.  In the meantime, it sits in my studio waiting for the repair and for new seat cushions.  I intend to use it while doing handwork and when people come into the studio for a visit.

I just wish my mom were still alive to tell her.  She would be so very happy for me.  She loved antique furniture, especially useful pieces of furniture. 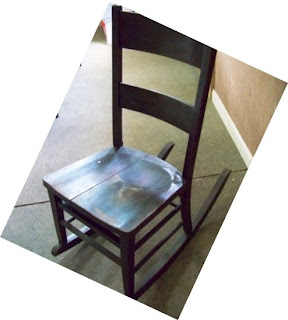 I've thanked my in-laws several times for the rocker, but I really want to do something nice for them.  I'm thinking that they'd like a sofa quilt, so it will go on my to do list.  Maybe I can even have one made by Christmas.  Wouldn't that make a nice gift?
Posted by Mary Marcotte

You are so blessed by the in-laws you have! What a generous gift!

And a sofa quilt would be a generous thank you!