These pretty jars are likely the last ones of this summer.  I canned them this week and am quite happy to say that I won't be going in the okra again very soon.  Not that the okra are  finished, of course, they would keep producing until the first frost if I continued to pick them two or three times weekly.  But I have no plans to continue.  We have enough in the freezer and pickled in jars for this year at least. 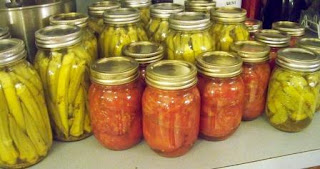 I have to admit, however, that they sure look nice.  I was able to put up some more tomatoes, this time they are canned with Italian seasonings so that when I put them in spaghetti sauce or use them for pizza, they will already have some of the seasonings I would normally add. Also the tomatoes will taste better if we choose to eat them from the jar.  These were canned whole or cut into large chunks because I have the feeling that we'll eat most of them this way. 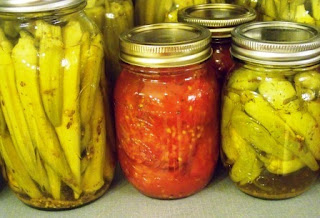 Two pints have pickled sweet peppers in them.  I don't eat banana peppers unless they are cooked into something like a gravy, but some of my boys love them.  So I decided to try a few pints.  They look good, and hopefully they'll taste as good.

At a guild meeting of the Louisiana Cotton Quilters Guild a few months ago, we voted to make a Christmas themed quilt to raffle as a fundraiser.  Guild members met a few times to paper piece the quilt blocks, then one or two members worked on sewing the blocks together.  It's a beautiful quilt top.  Because I knew I'd be unable to met to either piece the blocks or put them together, I decided to offer to quilt it. 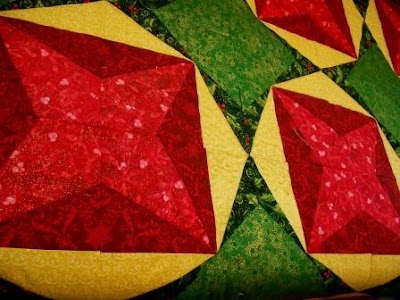 At our June meeting, we voted again to allow me to quilt it.  There was quite a lively discussion about whether we should hand quilt it, but there's already a quilt planned for hand quilting.  That one is to raise money for the Cottonport Museum.  In the end, the quilt found it's way to my studio.  I loaded it onto the Innova before I realized that I hadn't taken a photo.  So here's a photo of a section of the top.  It's more difficult to see, of course, but you can see that the colors are very Christmasy in shades of red and green and a golden yellow.  I promise more photos later.  I actually took several photos but they are even worse than this one!  I'm such a horrid photographer!

In the darkest green and in the yellow there's a scroll or vine motif, which I like to do, so I'm pretty sure I'll use that somewhere in the quilting.  I've already decided to quilt a wreath design in the red square.  I'm just not sure what I want to do with that green.  It's an odd shape and I need to fill the quilt with as much quilting as I can.  Because so many different people worked on the piecing, there are some sections that are a bit loose and I think that dense quilting will resolve some of the issues that come with loose stitches.  Any suggestions for a good, dense quilting motif that is maybe just a little Christmas?  I sure could use some help with this!
Posted by Mary at Fleur de Lis Quilts

Your jars of produce are just beautiful! Did you pickle any of the okra? That is such a generous offer of you to do the quilting! I agree, a dense quilting sounds like the way to go. But I have nothing to suggest! I know you will come up with something that will be perfect for it!

There are two things in this post that I have wanted to try but haven't- canning, and quilting! :) Both of yours looks great!